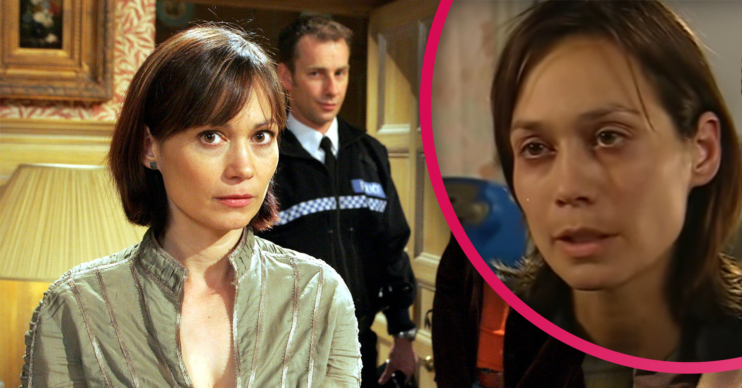 Who was Zoe Tate in Emmerdale, who are her children and why did she leave the village?

Could her daughter Jean ever come back to Emmerdale?

She was the first lesbian character in a soap and battled schizophrenia.

She also dealt with the death of her father and her brother, being a single parent to daughter Jean and guardian to nephew, Joseph.

Who was Zoe Tate in Emmerdale?

Zoe was a veterinary student when she first came to Emmerdale – or Beckindale as it was still known when she arrived – with her family.

She was a passionate supporter of animal rights and often rubbed the locals up the wrong way. But she won them over and once she was qualified she set up a successful practice with Paddy Kirk.

Read more: Who did Freddie Jones play in Emmerdale and who was his famous son?

It was Zoe who encouraged half-brother Jamie Tate to train to be a vet and to come to Emmerdale to work in the practice.

What happened when Zoe came out?

Zoe came out in 1993, becoming the first lesbian character in soap.

Her dad Frank was shocked and disappointed at first, but he came round quite quickly and proved to be supportive of his daughter.

Read more: Who is Sarah Sugden and how did she nearly die – numerous times?

Her dad, Ned Glover, didn’t want her working for a lesbian. There was tension between Zoe and Ned for a while, but eventually he admitted he was wrong.

Zoe had a romance with interior decorator Emma Nightingale and, although it was before equal marriage was legal, the pair decided to have a blessing.

But when Emma’s ex Susie turned up at the ceremony, there was a spark between her and Zoe, and eventually Zoe broke up with Emma and started a relationship with Susie instead.

How were Zoe, Chris and Charity connected?

Chris Tate married Charity Dingle, much to Zoe’s disgust. She didn’t thing the Dingle diva was right for her brother.

But in the end it was Zoe who fell for Charity. The pair had an affair and for a while, Zoe was obsessed with her sister-in-law.

When Charity ended their romance Zoe began blackmailing her, but Charity told Chris the truth instead and he chose his wife over his sister.

When Chris, who had an inoperable brain tumour, took his own life, he framed Charity for his murder.

Charity knew Zoe was aware of what her manipulative brother had done, and tried to seduce her sister-in-law. But Zoe got wise, and Charity ended up in prison.

Emmerdale: Zoe Tate and her schizophrenia

Liam’s death and then her affair with Charity left Zoe depressed and she began having schizophrenic episodes.

Zoe set fire to the church, and began talking to her dead father, Frank.

When she was diagnosed with schizophrenia and sectioned, she found out she was pregnant.

She had no memory of how she got pregnant and at first wanted to have an abortion, but she later decided to keep her baby and when her daughter was born, she named her Jean, after her mother.

Scott Windsor realised he must be Jean’s dad and Zoe – who didn’t remember them having sex – thought he had raped her. But eventually she accepted that their liaison had been consensual.

How did Zoe leave Emmerdale?

Still reeling from Chris’s death and Jean’s birth, Zoe planned to emigrate to New Zealand with Jean and Joseph.

After a confrontation with Scott, she ended up injecting him with ketamine and stood trial for attempted murder.

But when Paddy testified that Scott had been angry on the night Zoe attacked him, Zoe was cleared.

Sadie King convinced Zoe to sell Home Farm to her at a knockdown rate and Zoe agreed.

But she had the last word when, working with estate manager Callum Rennie, she engineered it so Home Farm exploded just as the Kings arrived.

Her exit was an hour-long special episode, and was watched by over 8 million people.

What happened to actress Leah Bracknell?

Leah’s much missed by her former castmates.  The character of Zoe Tate is still alive off-screen and was mentioned by Jamie Tate when he returned to the village.

Perhaps her daughter Jean, who would be 18 now, will return to the village one day? We’d definitely like to see more Tates in Emmerdale.

Want more on Emmerdale and its characters?

Entertainment Daily has a dedicated Emmerdale spoilers section for you to get your fix before the latest episodes air.