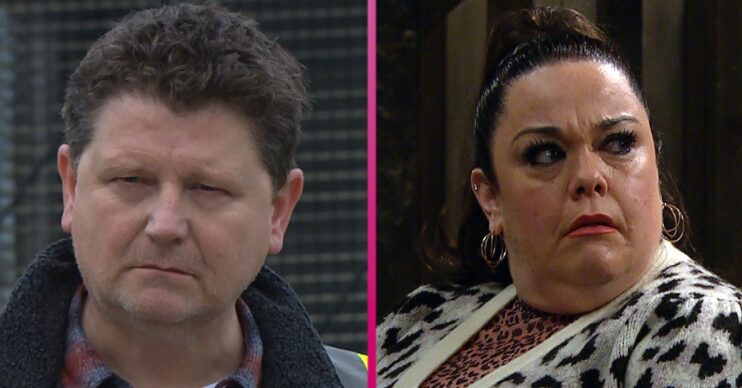 Who was Paul Ashdale in Emmerdale? How did he die and did he marry Mandy Dingle?

Paul Ashdale in Emmerdale was the fiancé of Mandy Dingle and father of Vinny Dingle.

He wasn’t in Emmerdale for long but he made a big mark on the village.

But who was Paul? Why did he beat Vinny? And how did he die?

Read more: Laurel in Emmerdale: How old is she and how many times has she been married?

Who played Paul Ashdale in Emmerdale?

He was familiar to soap fans already because he appeared in Coronation Street as Joe McIntyre – the ill-fated husband of Gail, and dad to Tina.

He’d also been in sitcom Home to Roost, among many other television shows, including Life on Mars, Silent Witness and Waterloo Road.

Paul is also a director and before joining the cast of Emmerdale as Paul, he was directing episodes of the ITV soap.

Who was Paul Ashdale? His arrival in Emmerdale

Paul arrived in the village to track down his son, Vinny.

Vinny was living with Mandy Dingle who’d brought him up since he was a baby.

Paul – who was a gambling addict – had walked out on them both when his son was only five and hadn’t seen them since.

When he arrived in the village, Mandy was horrified. She lied that Vinny wasn’t living in Emmerdale and sent Paul away.

But when he realised the truth, he stuck around and got a job at the scrapyard. He promised Mandy and Vinny that he had changed his ways.

Eventually, Mandy was won over by Paul’s charms and the couple got back together and started planning their wedding.

Paul Ashdale in Emmerdale and his abuse of Vinny

What Mandy didn’t know, though, was that Paul’s nice guy exterior was hiding a dark secret.

He was gambling again and that wasn’t the half of it.

Paul was also abusing poor Vinny, physically and emotionally. He criticised him, put him down, taunted him and used him as a punchbag.

But Vinny loved his dad and wanted to see the best in him, so he didn’t tell anyone – except girlfriend Liv Flaherty – the truth.

How did Paul die?

She knew all about his gambling, and his abuse of Vinny, and she even knew that he had arranged for Vinny to be kidnapped in order to get his hands on some cash.

Brave Liv confronted Paul at the barn where he and Mandy were due to tie the knot later that day, but he lashed out at her viciously.

As he went to attack her again, suddenly Jimmy King crashed his lorry through the barn wall, sending both Liv and Paul flying!

Liv managed to get herself free and tried to save Paul, who was trapped under a collapsed beam.

But she gave up and escaped the barn in the nick of time before it exploded, leaving Paul behind.

Paul later died of his injuries, so he never married Mandy.

Liv struggled with the guilt of having left him in the barn and turned to drink to cope.

Meanwhile Mandy was forced to deal with the truth about her fiancé and Vinny was in a mess too.

What is Reece Dinsdale up to now?

Paul Ashdale may have left the Dales but his alter-ego Reece hasn’t said goodbye to Emmerdale.

He’s gone back to directing episodes of the soap.

He recently confirmed his next event will take place next month and be hosted by himself and his former Corrie co-star Ian Puleston-Davies, who played Owen Armstrong in the soap.