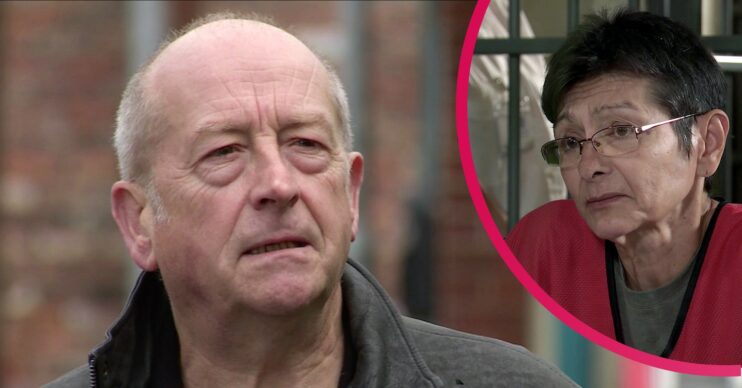 Who was Geoff Metcalfe in Coronation Street and why does his reign of terror live on?

Is Yasmeen really free from her evil ex-husband or could there be another nasty surprise in store?

Hospital radio DJ Geoff was a comedian, magician and general fun guy – but he was hiding a dark secret. So what was his story?

Geoff Metcalfe in Coronation Street was played by experienced actor Ian Bartholomew. He first appeared on screen back in the 1980s with roles in Bergerac, Minder and The Darling Buds of May.

He continued to act in all sorts of dramas including Spooks, Holby Blue, Maigret and New Blood, as well as having a long and varied career on the stage.

In 2018 he joined Coronation Street as Geoff.

Ian said his children didn’t want to watch him being so awful to poor Yasmeen when he played Geoff!

Geoff was a bit of a local celeb when he first arrived in Corrie. He was a hospital DJ and seemed to be an all-round good bloke.

Geoff wasn’t physically abusive – he didn’t hit Yasmeen – but he frightened her and controlled every aspect of her life.

He forced her to clean the house endlessly and to a very high standard. He kept control of the money they had and made her work to a strict budget. He even set up cameras around the house to keep an eye on what she was doing when he wasn’t there.

Yasmeen’s granddaughter Alya Nazir didn’t like Geoff but he made her life so difficult she moved out of the house, and he also bought into Speed Dahl so that Alya didn’t have full control of the business.

At a magic show, when Yasmeen got stuck in a box, Geoff became famous on the internet for his response. He became known as ‘jiggle-it Geoff’ and he was furious about it.

He took his anger out on Yasmeen and stepped up his control. He staged a burglary, told everyone Yas was an alcoholic and, in shocking scenes, he even killed Yasmeen’s chicken Charlotte Bronte and fed it to his wife.

In May 2020, Geoff threatened a terrified Yas with a knife. She fought back with a broken wine bottle and stabbed him in the neck.

Geoff was taken to hospital where he played the victim and Yasmeen was arrested.

She spend several months in prison waiting for her trial, and suffered a heart attack too, but eventually thanks to Geoff’s ex-wife Elaine giving evidence, Yas was found not guilty.

Angry Geoff wanted half of Yasmeen’s house but when she refused he set out for revenge. He set fire to the house though Alya and Yas managed to escape through a skylight and on to the roof.

Geoff climbed out in pursuit but lost his footing and fell. Though Yasmeen tried to help him, he plunged to his death, surrounded by Yas’s chickens.

His evil deeds live on, though. Poor Yasmeen has been left in dire financial straits thanks to his debts and has been forced to sell the community centre.

And she’s still suffering mentally from the effects of his abuse.

Now the news that her grandson Zeedan Nazir – who part-owns Speed Dahl – is coming back to the Street could mean there are more troubles in store for Yas.

But is this the last part of Geoff’s nasty legacy or is this a whole new problem for Yasmeen?