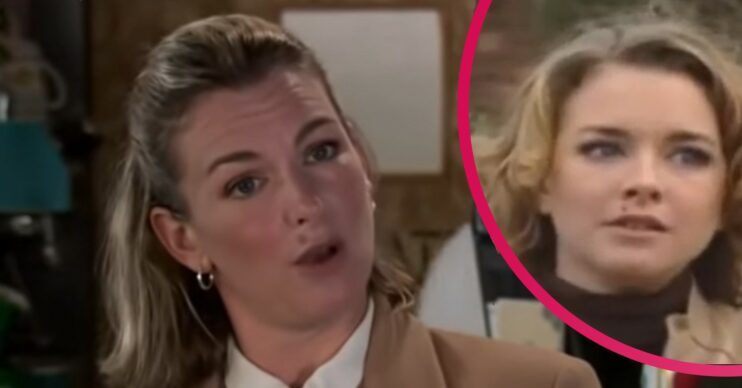 Who plays Penny in Coronation Street? Actress Emma Stansfield has been in the show before

Coronation Street fans were shocked to see an old face in Wednesday night’s episodes when actress Emma Stansfield returned to our screens.

But the actress, who originally appeared on the cobbles between 2005 and 2006, wasn’t playing the same character.

This time she popped up as Penny, the mum of a young girl throwing a birthday party that Hope Stape hadn’t been invited to.

Who plays Penny in Coronation Street?

Fans were stunned when Tyrone took his daughter Ruby to the party and came face-to-face with Penny.

But as he gave Penny a piece of his mind, those watching at home were more concerned with where they recognised the stuck-up mother from.

Eagle-eyed cobbles fans knew exactly who she was, though.

Thought that Penny looked familiar, she was in #Corrie years ago as Ronnie.

Wasn’t the actress playing Penny in #Corrie the same actress who played Ronnie who worked in the taxi office a few years back?

That annoying mum with Tyrone has been in #Corrie before. I’m sure she was involved with Steve Mcdonald over something a few years ago…

Who was Ronnie Clayton in Coronation Street?

Ronnie Clayton was one of Steve McDonald‘s many, many exes.

Ronnie arrived on the cobbles to interview for a job at Steve’s taxi firm and not only did he give her the gig, but he took her out for a drink as well!

However, Ronnie was married to gangster Jimmy Clayton and he wasn’t best pleased about his wife moving on. Jimmy owned a cab firm of his own and began targeting Steve’s business with threats until Ronnie came back to him.

Despite Jimmy’s best efforts to break Ronnie and Steve up, including luring them to a secluded farm and threatening them with a shotgun, the couple stayed strong.

But cracks were beginning to show and Steve cheated on her with Kelly Crabtree after they’d had a row.

Meanwhile, Ronnie was on her way to tell Steve they should give things another go when she knocked down a pensioner with her car. She checked no one had seen her and then drove off.

It was later discovered the OAP had died and Ronnie tried to frame Steve for the accident. Fortunately, he had an alibi in Kelly and Ronnie was eventually arrested.

What happened between Penny and Tyrone?

Tyrone was approached by Penny at the party who declared: “Ruby is a darling”.

Penny tried to convince Tyrone they hadn’t invited Hope because they were limited on numbers and they’d picked names out of a hat. But Ty knew it was a lie.

Trying to defend herself, Penny said: “Some parents might not want Hope around their children, but we don’t feel like that I can assure you.

However, Tyrone gave her short shrift and said they had to leave.

Will we see Penny again?

Although we don’t know if Penny will appear on the cobbles again, Tyrone certainly didn’t leave the party empty handed.

In fact, he bagged himself a date with another mum, Isla, who was impressed by his handling of the Penny situation.

Isla asked Tyrone out on a date and the pair will hit it off when they head to Speed Daal next week.

Unfortunately for Ty, it all ends in tears when Isla’s husband arrives and punches him!