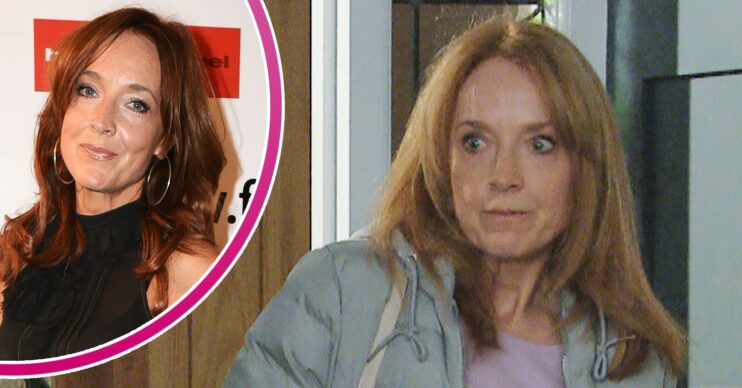 Who plays Liv’s mum Sandra in Emmerdale? Joanne Mitchell is married to a soap legend!

The actress is actually married to another Emmerdale actor!

Liv’s mum Sandra makes a shocking return to Emmerdale tonight (Friday, July 7 2022), but who plays the troubled character in the ITV1 soap?

Last year Liv was struggling with her alcohol addiction and went to visit her mum in a caravan park in Wales.

After Liv left the caravan park she got sober, married boyfriend Vinny and seems to be doing well with her recovery.

Tonight night Sandra returns to the village, but who plays her, and what brings her back?

Who is Sandra Flaherty in Emmerdale?

Sandra Flaherty is the mother of Liv Flaherty.

She was married to Liv and Aaron Dingle’s father Gordon Livesey.

We don’t know who are her parents are, but we know she has a sister called Bridget.

She made her first appearance back in 2006.

Before Joanne played Sandra, the character was played by two other actresses.

In 2006 Christine Brennan played Sandra and when the character returned in 2008, Janet Bamford played her.

Joanne then took over the role of Sandra in 2016, making her the third actress to play the character.

Sandra was last seen last year when Liv, who was struggling with her alcohol addiction, went to visit her mother in Wales.

Sandra, who is also an alcoholic, was thrilled to see her daughter and they partied together.

Soon Aaron arrived to collect his sister and when Liv had a seizure, Sandra realised she couldn’t look after her daughter.

Liv went back to the village and her mother hasn’t been seen since.

Five years ago, Sandra was involved in the sexual abuse storyline in which Aaron’s father, Gordon – Sandra’s ex – was convicted of raping his son.

Joanna Mitchell’s past roles in Emmerdale

Actress Joanne portrayed two other characters in the ITV1 soap before taking on the role of Liv’s troubled mum.

She played DS Karen Barnborough in 2003, before returning as Susan Davies in 2009.

What else has Joanne Mitchell starred in?

The actress also appeared as Marsha Clifton in Coronation Street.

Marsha was the mum of Kayla Clifton, who turned up on the cobbles to get revenge on Bethany Platt.

As Kayla’s mum, Marsha pitched up at Speed Daal to question why her daughter had put off going to university.

She was stunned to realise that Kayla had befriended Craig Tinker, who memorably helped to put corrupt cop, Neil Clifton – Marsha’s husband and Kayla’s father – behind bars for raping Bethany.

Actress Joanne has also starred as Sally in Run, Mrs Turner in Waterloo Road and Jo Lyons in Bodies.

She trained at The Bristol Old Vic Theatre School, where she met her future husband.

In 2011, she co-founded Mitchell Brunt Films with Dominic and has worked as producer/writer on several of the company’s films.

Why is Sandra back? Is she staying?

Sandra returns to Emmerdale tonight and tells Liv that she wants to seek help with her drinking.

Will Liv let her stay, and is Sandra telling the truth?