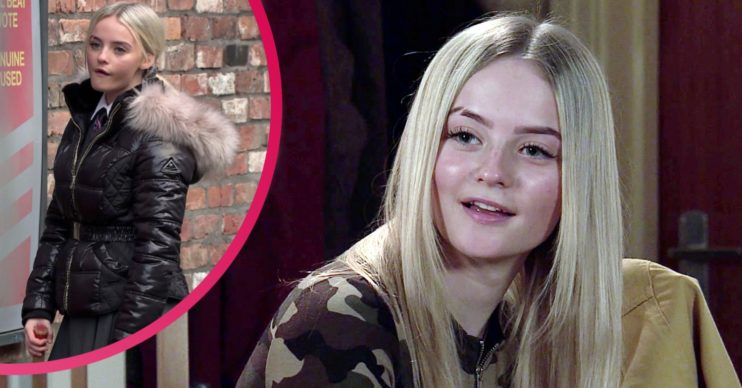 But who is she and who plays her and how old is the actress?

In tonight’s episode of the ITV soap (Wednesday, April 5) Kelly Neelan goes out with Corey, Eli, Summer and Asha to a wasteland.

After Asha leaves, Nina and Seb came across the gang on their walk. After Eli and Corey began making nasty comments about Nina, Summer becomes uneasy and left.

Soon Eli and Corey egg Kelly on to smack Nina and the couple rushed off.

Corey and his friends soon begin following Nina and Seb and the couple become the subject of a vicious and unprovoked attack.

But who is Kelly, who are her family and who plays her?

Kelly in Coronation Street: Who are her family?

Kelly is the daughter of Rick Neelan and Laura Neelan. She was born on May 22nd 2004.

She also has a brother, however he has never been seen on-screen.

Loan shark Rick was killed in 2019 by Gary Windass.

She first appeared after Rick disappeared and demanded Gary tell her where her dad was. But he told her that her dad was a loan shark and went on the run.

She later turned up on the cobbles again in April 2020 when it was revealed she transferred to Weatherfield High school and made friends with Asha and Summer.

After Rick’s disappearance Kelly lived with her mum Laura full time. But last year it was revealed that Kelly doesn’t have a great relationship her mum.

Laura ended up leaving Kelly by herself and Kelly went to stay with Billy, Paul and Summer.

Later Laura came back for Kelly, however it was revealed that Laura had gone off again and Kelly was taken into foster care.

Kelly in Coronation Street: Why is she in foster care?

Read more: Kirk in Coronation Street: Who plays him and when did he first arrive?

After Ricks disappearance Kelly lived with her mum Laura full time. But last year it was revealed that Kelly doesn’t have a great relationship her mum.

Laura soon left Kelly alone and she went to stay with Billy, Paul and Summer.

Later Laura came back for Kelly, however it was revealed that Laura had gone off again and Kelly was taken into foster care.

She is currently living with Toyah and Imran.

Kelly is played by actress Millie Gibson, who is 16.

Before landing the role of Kelly in Coronation Street, Millie played Mia in Love, Lies and Records in 2017.

She then played Indira in TV series Jamie Johnson from 2017 until 2018.

In 2018, she then played Lily Duffy in TV mini-series Butterfly alongside Emmett J Scanlan, Anna Friel and Callum Booth-Ford.

Read more: Steve McDonald in Coronation Street: How many times has he been married?