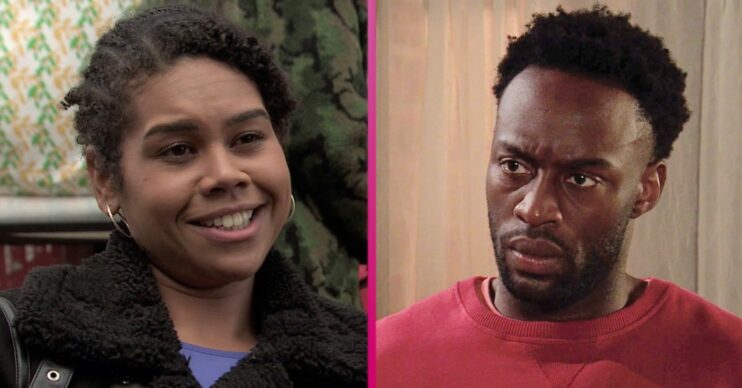 Who plays Grace Vickers in Coronation Street? Where have you seen Kate Spencer before?

Grace Vickers returned to Coronation Street tonight (Monday, March 14) after she left in December 2021. But who is Grace, who plays her and why is she really back?

Who is Grace Vickers in Coronation Street?

Grace Vickers is the ex-girlfriend of Michael Bailey and mother of Glory Bailey, who was born in 2021.

Grace first appeared in November 2019 when he saw her with baby Tianna.

Before living on Coronation Street, Michael and Grace were together but when she fell pregnant, he panicked and left her.

After some time he did return and wanted to be there for Grace and his child, but Grace didn’t want him involved.

When viewers first saw Grace on-screen, Michael spotted her in a supermarket car park with a baby girl.

As Grace was pregnant when she and Michael split, he assumed the little girl to be his daughter.

Grace eventually introduced Michael to the little girl, who was called Tianna.

Michael believed he was Tianna’s daughter, however in a shock twist it was revealed Tianna wasn’t Michael or Grace’s daughter.

Tianna was the daughter of Grace’s friend and Grace was her nanny.

Grace eventually explained that she miscarried their baby shortly after Michael left her and lied about Tianna.

Shortly after Tianna’s real identity was revealed, Grace found out she was pregnant with a baby girl.

Although Michael struggled to believe her at first, she could prove she was pregnant with his child.

Grace gave birth to baby girl, Glory Bailey, on March 17 2021. However the little girl was born prematurely and had to be placed on the ventilator.

At first Grace appeared to love motherhood, however she began neglecting Glory, leaving her home alone to go out drinking with friends.

When Ed and Aggie found out, they agreed to give Grace £20k in order for her to sign over her parental rights to Michael.

She then left Weatherfield in December 2021, but now she is back.

Why is Grace back?

Grace returned to Corrie tonight for Glory’s first birthday but it soon becomes clear she’s back for more money.

They decide it’s time to tell Michael the truth and break the news to him that Grace is blackmailing them and the only reason she’s back is for more money.

How will Michael react?

Kate trained at Rose Bruford College on the American Theatre Arts course and spent a semester at Columbia College in Chicago.

Where have you seen Kate Spencer before?

In 2017, she played Kellie Lomas in an episode of Doctors.

Kate is also set to appear in upcoming film Charlotte: The Movie where she will play Jessica.

Kate is engaged to her fiancée Paul Walker.

Last year, Kate shared the wonderful news to her Instagram followers that Paul proposed to her.

She told the story in her post saying: “After the Tomahawk steak, before the Tiramisu and with a coffee in hand, he turned me into an absolute blubbering mess.

“A million times over, completely and utterly yes.”

Recently Kate revealed to her social media followers she said ‘yes’ to her wedding dress.