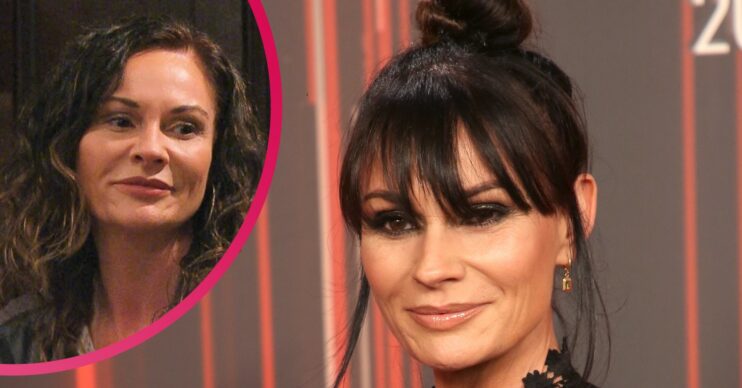 How many kids does she have?

Lucy Pargeter has been in Emmerdale as Chas Dingle for almost 20 years.

Chas is one of the show’s most iconic characters. Part of the legendary Dingle family, she’s also the landlady of the village pub, The Woolpack, and has been at the heart of many of the soap’s most dramatic stories.

But what about the woman who plays her? Who is Lucy Pargeter? Is she married? How how many children does she have? And what was the health scare that left her needing surgery?

Read more: Emmerdale fans distraught as soap airs one of its most heartbreaking deaths ever

Who plays Chas Dingle in Emmerdale and what else has Lucy Pargeter been in?

Actress Lucy Pargeter arrived in Emmerdale as Chas Dingle in 2002 dressed as a nun. However, she was really a stripper hired for her cousin Marlon’s stag do!

Prior to Emmerdale, she was in a band called Paperdolls, who toured with Boyzone.

Her acting career saw her have a part in the rebooted Crossroads, as well as roles in Soldier Soldier, and Dalziel and Pascoe.

She has also taken part in various reality TV shows, including Soapstar Superstar in 2006, where she finished in third place.

In 2013 she flew to Australia to take part in I’m A Celebrity and ended up in third place again behind David Emanuel and winner Kian Egan.

In 2019 Lucy announced she had split from long-term partner Rudi Coleano.

The actress and football coach had been together for more than 12 years.

A spokesperson confirmed the couple had separated, telling Digital Spy: “Lucy Pargeter has confirmed she has separated from her long term partner Rudi Coleano and while no longer together their main priority is raising their three daughters.”

How many children does Lucy Pargeter have?

Lucy and Rudi share three children together. Their first daughter, Lola, was born in 2005.

Twins Missy and Betsy, whom she calls the ‘Twirls’, followed in April 2017 after Lucy underwent IVF.

Lucy revealed she and Rudi had been trying to conceive a sibling for Lola for 11 years.

Struggles as a single mum

Lucy has previously opened up about her struggles as a single mum especially during the lockdown periods of 2020 and 2021.

When asked if she loved or loathed lockdown, she said: “I hated the film Groundhog Day and I hated the monotony of the whole thing. I went into it thinking I’m going to be really creative and do something different everyday.

“I’m here on my own with my three kids. I’m used to being a single mum but then you have to put into the mix that you’re actually trying to fight to keep your children alive and the fear of what would happen if I became sick. It’s all the implications.

“It’s a life and death situation for so many people and that has hit me massively.”

Health fears over her breast implants

In 2019 Lucy had her breast implants removed, after they stopped her breathing properly for 11 years.

The mum-of-three underwent the operation after enduring years of illness which she attributes to her boob job.

She told The Sun: “They are out. I’m as flat as a pancake, I look awful but feel good.

“When I woke up in recovery, the first thing I did was panic because I could breathe – I could take in a massive breath.

“I thought they were trying to give me too much oxygen – I panicked. I forgot what it was like to have a full lung of air. It’s amazing – I can breathe.”

Lucy appeared in a Dispatches documentary on Channel 4 investigating women who claimed their breast implants were making them ill, and the growing phenomenon of Breast Implant Illness.

Symptoms include choking, heart palpitations, physical pain and mental health issues – many of which Lucy endured.

Of her operation, Lucy added: “The surgery went absolutely fine, they were both really encapsulated, so they were both quite deformed. I know that everything is going to be much better, including my symptoms.

“Why I had them done in the first place: vanity. That old thing called vanity.”

Who does Lucy Pargeter play in Emmerdale?

Chas Dingle is the landlady of the Woolpack and is married to Paddy Kirk, although she has just begun an affair with Al Chapman.

Prior to her arrival in the Dales, Chas had been married to her teenage sweetheart Gordon Livesy..

She got together with Carl King, but the pair had a very rocky relationship, and eventually Chas was heartbroken when she discovered Carl was cheating on her with Eve Jenson.

She jilted Carl at the altar and used money she’d stolen from him to buy the Woolpack.

Chas then married Dan Spencer, though she was having an affair with Cameron Murray at the time.

Carl tried to rape Chas and she whacked him over the head with a brick in a panic. Carl died – and Chas stood trial for his murder. But viewers knew Carl had actually finished Cameron off. Chas was found not guilty and returned to the village.

Cameron then killed Chas’s half-sister Gennie, who’d found out the truth about his murderous instincts, and then in some of the most dramatic scenes in Emmerdale ever, took the customers at the Woolpack hostage.

Chas and Debbie ended up trapped in the flooded cellar of the pub, in the dark, not knowing where Cameron was lurking.

But thankfully they both escaped with their lives, while Mr Murray was electrocuted.

Who are Chas’s children?

Chas had a son with Gordon, Aaron. Although she hadn’t been a great mum, the pair got back on track and Chas supported her son through his acceptance of his sexuality and the death of his boyfriend, Jackson.

In 2016, Chas was heartbroken when Aaron revealed he’d been raped by his dad Gordon.

Chas stood by Aaron in court and gave evidence herself. Gordon was found guilty and later died in prison, and Aaron changed his surname to Dingle.

Following the Grace storyline, Lucy was nominated for numerous awards.

She took home Best Actress at the British Soap Awards in 2019.

What is Chas up to now?

Things aren’t easy for Chas right now after she discovered her mum, Faith, has terminal caner.

She has forced Faith into having chemo, even though Faith doesn’t want to continue with the treatment.

Meanwhile, as Paddy desperately tries to support his wife, she is pushing him away.

Instead, she it turning to Al Chapman for comfort.

The pair will start an affair.

Despite Chas feeling guilty, it seems in the coming weeks she just can’t keep away from Al.

Will Paddy find out?

And will Chas be left heartbroken?