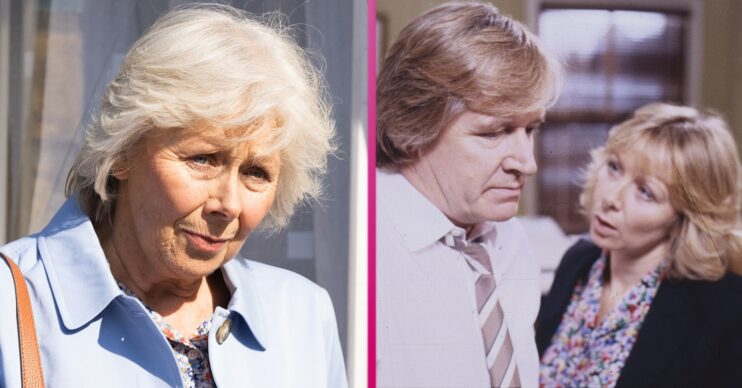 Who is Wendy Crozier in Coronation Street? What happened between her and Ken Barlow?

Wendy and Ken have a past

Wendy has a past on the cobbles, but who is she and what is her past with Ken Barlow?

Who is Wendy Papadopoulos in Coronation Street? When did she first appear?

Wendy first appeared in Coronation Street in June 1989 and at the time went by Wendy Crozier.

At the time she worked as a Weatherfield Council secretary.

She ended up having an affair with Ken Barlow after meeting him through her position as Planning Committee secretary when Ken was the owner of the Weatherfield Recorder free sheet.

Now she is a foster carer.

What happened between Ken and Wendy?

In 1989 Wendy and Ken shared their disdain of the secrecy and corruption of the council.

Wendy began giving details of the council’s plans to the Weatherfield Recorder, giving it an edge over the Gazette.

Ken didn’t tell his wife Deirdre about the leaks, fearing she would expose Wendy, but Deirdre became suspicious.

Eventually Deirdre found out the truth about Wendy and exposed her, getting her fired.

Ken hired her to work at the Weatherfield Recorder, meanwhile things weren’t good between him and Deirdre.

When Deirdre forgot his birthday, Wendy prepared a meal for Ken and they shared a kiss.

The two then entered an affair.

However Wendy encouraged him to tell Deirdre the truth, growing tired of being his bit on the side.

Eventually Deirdre did find out, but Ken was unable to choose between the two women.

However Deirdre was fed up and threw Ken out and he moved in with Wendy.

But Wendy and Ken’s relationship didn’t last too long.

After Ken sunk into a depression, he realised he should never of left his wife and walked out on Wendy.

When did Wendy Crozier change her name to Papadopoulos?

Off-screen Wendy went on to marry a man named Christos Papadopoulos in 1991 and they moved to Norfolk.

But after 15 years together, Christos died of lung cancer and Wendy moved back to Manchester.

In 2012 Ken stood for Chair of Governors at Bessie Street school and was reunited with Wendy, who was also a governor at the school.

Ken didn’t want to work with Wendy again but after they had a talk, he kept the job.

He didn’t tell Deirdre, who had remarried seven years previously, that he was working with Wendy again, however she did eventually find out.

When Ken got drunk one night, Deirdre became suspicious that Wendy and Ken had rekindled things.

She went with Rita to visit Wendy and Ken had slept on the sofa, drunk.

But Wendy wanted Ken back and lied saying they slept together.

Ken told Wendy he never wanted to see her again and Deirdre realised Wendy was lying.

Wendy returned to Corrie tonight as it was revealed she is the foster carer looking after Abi and her son Alfie in the mother and baby unit.

But will she come face to face with Ken again?

What else has Roberta Kerr been in?

Coronation Street isn’t the only soap Roberta has been in.

In 1994 she joined the Emmerdale cast as Jan Glover for four years.

She also played Judge Barrett in Hollyoaks in 2017.

Roberta has also had roles in Doctors, Casualty, Downton Abbey and Silk.

Read more: Who is in the Coronation Street cast 2022? Meet the full line-up

Will you be watching tonight’s episode of Coronation Street? Leave us a comment on our Facebook page @EntertainmentDailyFix and let us know what you think of this story.