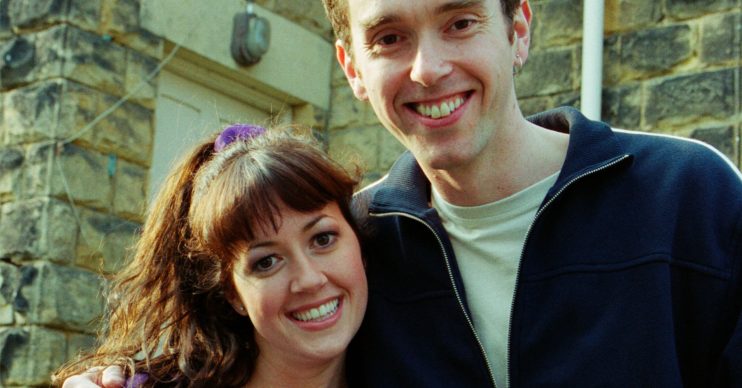 Who is Tricia Dingle in Emmerdale? How did first wife of Marlon Dingle die?

Who was Tricia's love rival and who came out on top?

Cheeky Tricia Dingle in Emmerdale was such a character that she’s still fondly remembered by fans more than 16 years after her tragic death.

So who was Tricia Dingle, who did she marry and how did she die?

Big-hearted Tricia arrived in the village in 1998, surprising her grandfather, Alan Turner, who didn’t recognise her. Alan owned the Woolpack so he gave Tricia a job behind the bar and she quickly proved a hit with drinkers.

Tricia annoyed rival barmaid Mandy Dingle and the two argued often and even ended up mud wrestling on one memorable occasion!

Tricia’s time as a barmaid went wrong, though, when she bought the fireworks that ended up setting the pub alight. Oops!

Tricia had a few ill-fated love affairs when she first arrived in the village. First up was Terry Woods, who fell hard for sweet-natured Tricia. She didn’t return his affection and he was broken-hearted when she rejected him after they spent the night together.

Read more: Where is Emmerdale filmed and can fans visit?

Then Tricia had a romance with village bad boy Scott Windsor, and slept with frenemy Bernice Blackstock’s boyfriend, Gavin, behind her back leading to a long-running rivalry between the two women.

In 2000 Tricia married handsome Aussie newcomer Joe Fisher. But it wasn’t a love-match. Joe was gay and needed to get hitched to stay in the country with his boyfriend Jason Kirk.

As well as battling over Gavin’s affections, Tricia and Bernice were often at loggerheads over the Woolpack.

She was annoyed when her grandad gave Bernice the bar manager’s job instead of her, and tried very hard to stop poor Bernice taking over the pub when she wanted to buy it from Alan. Tricia even flirted up a storm with Chris Tate in an attempt to get him to stump up the cash to help the villagers buy their beloved pub.

And when Bernice finally took on the Woolie, Tricia blackmailed her into agreeing that she and her grandfather could stay on – and even ‘accidentally’ got Bernice’s name spelled wrong on the pub sign. She may have been good-natuered but Tricia was no pushover!

In 2002, just after her mum Steph Stokes arrived in the village to cause trouble, Tricia got together with Marlon Dingle.

The cute couple fell madly in love and planned to marry. But their wedding day was full of disasters and didn’t happen. Eventually they tied the knot in a romantic surprise Valentine’s Day ceremony and Tricia became Mrs Dingle.

Not long after the wedding, Tricia got the chance to star in a Bollywood movie and left the village. While she was away, Marlon had a one-night stand with his second cousin Charity.

Tragedy for Tricia Dingle in Emmerdale

When Tricia returned from her stint as a movie star, she soon discovered what Marlon had been up to behind her back. She couldn’t get over the betrayal and made plans to leave her cheating hubby.

Besotted – and guilty – Marlon, though, wrote a list of 101 things he loved about his wife. Aww.

Just as Tricia was ready to leave the village forever, on New Year’s Eve 2003, Diane gave her the list Marlon had written. Realising she still loved her hapless husband, Tricia raced back to the Woolpack to tell him.

But there was a huge storm that night and as she arrived at the pub, lightning struck the Woolie and sent the chimney crashing down on top of the frightened barmaid.

Diane and Marlon found Tricia under the rubble and called for help.

However, her injuries were too bad and poor Tricia passed away in hospital a few days later.

Do you still miss Tricia Dingle?