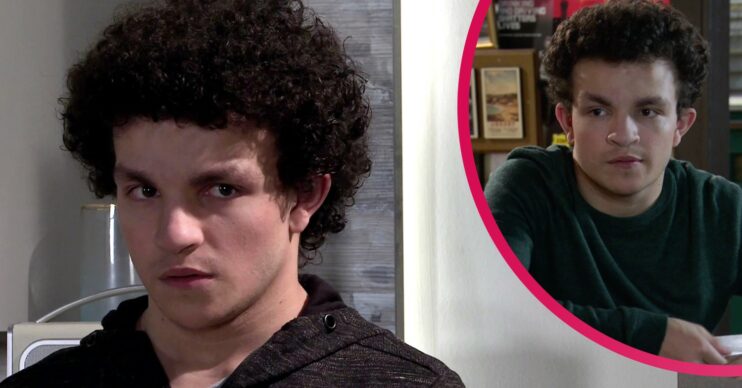 Who is Simon Barlow in Coronation Street? What happened to his mum?

He's grown from a troubled child into a trouble-making teenager

Simon Barlow on Coronation Street is the troubled teen son of Peter Barlow and the adopted son of Leanne Battersby. He’s the reason poor Leanne ended up dealing drugs and he was devastated when his adopted brother, Oliver Battersby, died last year.

Simon is the grandson of Corrie legend Ken Barlow, nephew of Tracy Barlow and Daniel Osbourne, and cousin to Amy Barlow, Adam Barlow, and Bertie Osbourne.

But poor Simon had a troubled start to life. What’s his story?

Simon Barlow in Coronation Street is played by actor Alex Bain. He took over the role in 2008 from twins Jake and Oscar Hartley, who’d played Simon as a tot.

Alex started his telly career with an ad for Rice Crispies, then he had a part in the BBC drama Sunshine, before landing the role of Simon in Corrie.

In December 2018, Alex became a dad aged just 17, when his then girlfriend Levi Selby gave birth to their daughter, Lydia-Rose.

Alex and Levi have since split and he’s now loved-up with his model girlfriend Mollie Lockwood.

Simon Barlow in Coronation Street and his parents

Simon was born to Peter Barlow and Lucy Richards. They’d already split up by the time their baby boy was born, because Lucy had discover that Peter had got married to Shelley Unwin – when he had already got married to her!

Lucy wanted revenge so she let Peter think they could start a new life together, but then left to emigrate to Australia with Simon.

But in 2008, Lucy died from ovarian cancer and Peter got custody of his little boy.

Peter and his partner Leanne Battersby grew close to Simon and Leanne began to see him as her own son. Simon was thrilled when Peter and Leanne tied the knot.

Simon Barlow and his ever-changing parents

Simon Barlow in Coronation Street was furious when Peter cheated on Leanne with Carla and his parents split up. Since then he’s mostly lived with Leanne.

He’s seen her lose her partner Kal Nazir, as well as rekindling her romance with Nick Tilsley.

While Peter has been with Carla off and on and off and then on again, as well as having a relationship with his one-time sister-in-law Toyah Battersby.

During a rare settled time in Simon’s life, Peter employed Tina McIntyre as a nanny for his son.

But in typical Peter fashion, he was soon having a torrid affair with the young woman despite being busy planning his wedding to Carla.

When Carla’s brother confronted Tina at her flat, he pushed her from the balcony. Tina survived the fall, but Rob hit her with a metal pipe and killed her.

Poor Simon was very upset to lose his friend and even more devastated when dad Peter was arrested for the crime.

Leanne has stuck by her son, through thick and thin, and never more so than when he began physically abusing her.

After Kal’s death, unhappy Simon began taking his emotions out on his adoptive mum.

He apologised and promised not to hurt her again, but when he found out about Leanne’s past as a prostitute his anger escalated and he began hitting his mum again.

His behaviour got worse, but he calmed down again when he found out Leanne was pregnant.

Unfortunately, Simon’s always drawn to bad influences! He blackmailed Toyah when she was planning to adopt Eva’s baby, and he got involved with nasty Tyler, committing robberies with the young tearaway.

And eventually, Simon met Jacob Hay who groomed him into dealing drugs.

Things got out of control, and Leanne found out. She took over Simon’s deliveries but that wasn’t enough for evil Harvey Gaskell.

The family were forced to go on the run when Leanne turned to the police for help. But eventually Harvey was put behind bars.

Simon’s being quiet for now but we reckon it won’t be long until he’s causing trouble again. What do you think?