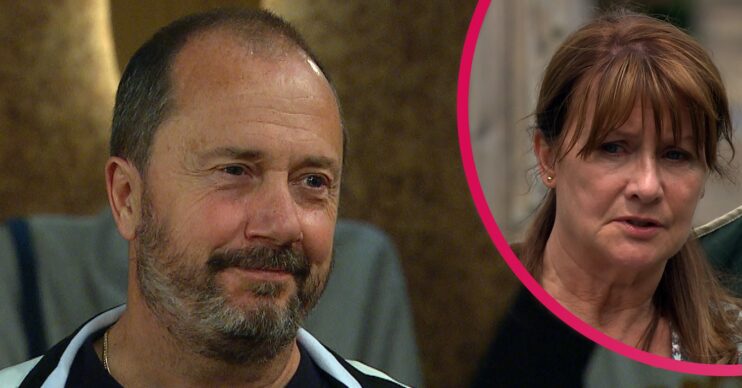 Who is Russ in Emmerdale? Where have you seen actor Rob Jarvis before?

Actor Rob has been in loads of things!

Russ in Emmerdale is set to cause havoc in the coming weeks, as he gives Wendy Posner a shock.

Wendy, played by Susan Cookson, has recently attended her mother-in-law’s funeral, but when her abusive ex Russ turns up she’s thrown for a loop.

Not only that but Russ is demanding the 50 grand his mum left Wendy in her will, and will stop at nothing to get it.

Actor Rob Jarvis plays Russ, and he’s a familiar face. But where have you seen him before?

Rob will cause chaos as Russ in Emmerdale

Russ will waste no time in putting the squeeze on Wendy, and begins to ingratiate himself into village life.

He’s set to manipulate and coerce Wendy – and Victoria for that matter – and threatens that there will be consequences for both of them if they don’t cough up the cash.

With Russ telling Victoria that he’s Harry’s granddad, he puts his plan into action.

But with Wendy only knowing the truth, how will she expose her horrid ex?

Start filming @emmerdale today…. In for a little while….

Russ could be around for a while

When it comes to the actor playing Russ, Rob Jarvis teased his appearance in June.

In a tweet he said: “Start filming @emmerdale today… in for a little while…”

Rob’s tweet hints that Russ will be hanging around for a little while.

And that means all of Wendy’s ghosts from the past coming back to her haunt her.

What has Rob Jarvis been in before?

Actor Rob has been in plenty of series throughout a long a distinguished career.

He started his career on Casualty in 1988 and played three different characters over the decade, including Vic Cheadle.

Later in his career he also appeared on Holby, playing three different characters over a span of 15 years.

He also popped up in shows like Dalziel and Pascoe, The Bill, Waterloo Road, Luther, Doctor Who, Silent Witness and Death In Paradise.

And more recently there was Collateral, Guerrilla with Idris Elba on Sky and ITV’s period drama, Sanditon.

But Rob is perhaps best known for playing Eddie in Hustle – the gullible but loveable barman who the team play tricks and cons on frequently.

He’s due to appear in the upcoming BBC One crime drama, Showtrial.

Born on the Wirral in 1965, Rob describes himself as “actor, voice over artist, guitarist, dad, husband, son, brother, uncle, Evertonian, irritant” on his Twitter page.