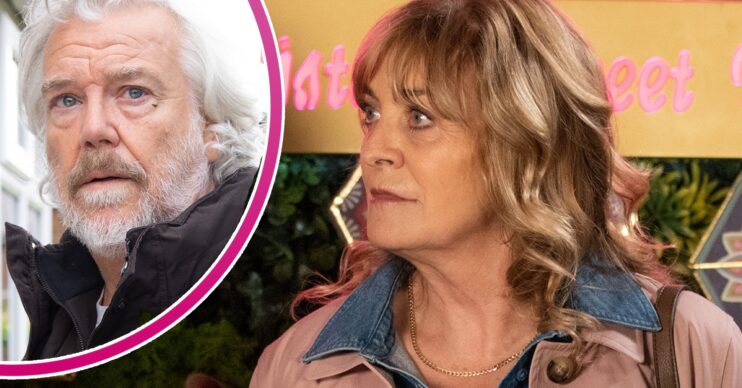 Who is Lucy Woodrow in Coronation Street? What has Lynda Rooke been in before?

Coronation Street’s Stu Carpenter‘s secret past is revealed as his ex-wife, Lucy Woodrow arrives on the cobbles.

While we know Stu has had a troubled past which left him homeless, viewers have been touched by his kindness and his romance with Yasmeen.

However, our opinion could be about to change big time as Lucy re-enters her hubby’s life and drops a bombshell about his past.

But who is Lucy Woodrow? Who plays her? And where have we seen her before?

Who is Lucy Woodrow in Coronation Street?

Lucy is the ex-wife of Stu Carpenter.

It’s clear she and Stu have a troubled history.

Recently we’ve seen Stu trying to make contact with his estranged daughter, Bridget, but his approaches were fiercely rebuked. So it seems all has not been well in the family for a long time.

Lucy spotted Stu when he was featured in the Gazette and tracked him down. Bursting into Speed Daal she warned Stu to stay away from Bridget.

Yasmeen tried to defend Stu, but Lucy refused to see Stu painted in a good light. So, Lucy revealed Stu’s big secret – and the bombshell shocked Yasmeen to the core.

Read more: What is Aaron’s secret? Is he hiding something?

What has Stu Carpenter done and what happens next?

After Lucy leaves, Stu tells Yasmeen that she doesn’t know the whole story and protests his innocence. However, Yasmeen throws him out of the restaurant.

Later, Yasmeen tracks down Lucy and asks for more details. But how will Yasmeen react to what Lucy has to tell her?

Whatever happens, the revelations from his past Lucy has revealed are set to send Stu into a downward spiral.

He’ll end up in hospital after drinking himself into a stupor. And later, Stu will head to Yasmeen’s house to retrieve his watch.

Whatever Lucy has told her, it has clearly left Yasmeen terrified to be alone in the house with him. But Stu refuses to leave until she hears him out.

Yasmeen calls Zeedan for help and he arrives with Craig, who arrests Stu.

It seems Stu’s situation is only going from bad to worse as a result of Lucy’s bombshell.

Lucy Woodrow is played by Lynda Rooke, who has starred in many TV shows over the years.

If you think she looks familiar, she does have a bit of a Corrie past.

Lynda starred first starred in the show in 1990 as Laura Collins, who worked at Ingram Texiles.

Later, she almost ran the Rovers when her character, Ruth Horner, applied to be manageress when Natalie Barnes was leaving in 2000.

Then she was Eleanor Jacobs from 2013 to 2014, who ran the soup kitchen that Sophie Webster worked at.

What else has Lynda Rooke been in?

Lynda is best remembered from her role in Hollyoaks as Jack Osborne’s wife, Jill (Yes, they were Jack and Jill!).

Jill was mum to Gina, Kate and Sol (memorably played by Paul Danan). She featured in the show from 1997-2000, eventually dying of a brain tumour.

Her other big soapie role also had a tragic end. Lynda starred as Beth Harper in Casualty from 2002 to 2003. Beth was the wife of ward boss Harry Harper – played by Simon MacCorkindale – but was killed in a car crash.

Lynda has also starred in dozens of other shows including Brookside, Endeavour – as Morse’s stepmum Gwen – and Waking the Dead.

These days Lynda is a busy lady. As well as taking on her new Corrie role as Lucy, earlier this year she became president of the actors’ union Equity