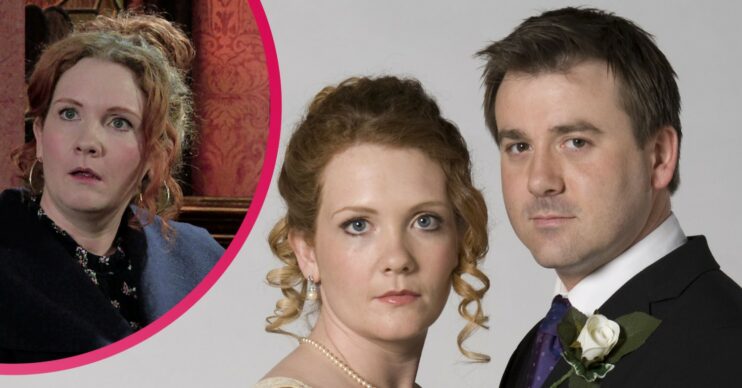 Who is John Stape in Coronation Street? Who did he kill?

But when did John die, when did he marry Fiz Brown and how many children does he have?

Who is John Stape in Coronation Street?

He is the biological father of Jade Rowan and Hope Stape.

Fiz spent most of her time in foster care and she ended up losing contact with John before he went to university.

John went on to become a teacher and began teaching at Weatherfield High.

He ended up bumping into Fiz and the pair soon reinstated their romance.

Soon John began giving Sally Webster lessons as she was resitting her A-Levels.

Sally soon developed feelings for John and admitted this to him.

John claimed he wasn’t interested in her, but it wasn’t long before he began having an affair with Sally’s sixteen year-old daughter, school girl, Rosie.

Meanwhile Fiz started to suspect John  was cheating with Sally.

John gave Rosie the present. When she opened it and revealed pyjamas, John realised his mistake.

When Fiz opened Rosie’s present, she stormed over to the Websters’ house and accused Sally of cheating.

Soon Rosie returned with the present. When Fiz saw the wrapping paper, she pieced things together.

Kevin beat up John and John left the street until July 2008.

John and Fiz got back together and when John’s grandmother died, she left him her house.

However John kidnapped Rosie and locked her in the attic of his grandmother’s house.

After weeks being kept in the attic, Fiz went round to John’s and was suspicious seeing women’s clothes.

He admitted he had Rosie in the attic.

When he went to see her, Rosie attacked John. The police were called and John was arrested and taken into custody.

In January 2009, John was sentenced to two years in prison.

When did John and Fiz get married?

When John was in prison, Fiz began home-schooling her little brother Chesney and went to John for advice.

However they began to fall for each other once again.

Eventually they got engaged and in October 2009 they got married.

John was released from prison the following month.

Who is Colin Fishwick?

Wanting to teach again, John stole some of Colin’s stuff and planned to set up a fake identity under his name so he could go back to teaching.

He didn’t think he would get caught as Colin was going to Canada.

John got himself a job at Daisyfield High School in Rochdale.

What happened to Colin Fishwick? Did John kill him?

At a teaching conference, John reunited with another former colleague Charlotte Hoyle.

He confessed he was using Colin’s identity.

Charlotte told John that Colin was returning and John confessed to Colin what he had done.

Colin seemed to be okay with what John had done.

Soon a man turned up at John’s door thinking he was Colin.

It turned out Colin had left for Canada as he had been having an affair with a married woman, and now the husband was looking for John, believing him to be Colin.

Fiz pointed the man towards Colin and he ended up getting beaten up.

Colin told John he wanted money or he would go to the police about his using his identity.

John and Charlotte waited at John’s for Colin to arrive.

But when Colin  got there he suffered a brain haemorrhage.

Instead of calling for help, they wrapped up Colin’s dead body in a carpet and put in a hole in Underworld factory.

In December 2010, Charlotte showed up on the street and demanded John leave Fiz for her.

When John refused she grabbed the hammer and swung it at him.

As Charlotte went to tell Fix about what they had done, he swung the hammer and hit her, killing her.

As he went to call 999, an explosion at the joinery bar caused the tram crash. John left Charlotte’s body near the wreckage.

John then left for the hospital to be with Fiz, as he had gone into labour early. She gave birth to a daughter called Hope.

John began doing odd jobs for Colin’s mother Joy but ended up confessing to everything that happened with Colin.

When Joy needed her angina spray, he withheld it from her until she agreed to not go to the police.

When she tried to shout for a neighbour, John covered her mouth which caused her to die.

Eventually the truth came out about Charlotte, Joy and Colin.

Why did Fiz go to prison for John?

John eventually fled Weatherfield and Fiz was accused of the murders of Colin, Joy and Charlotte.

Fiz was put on trial.

Meanwhile John returned and held Rosie in Jason Grimshaw’s flat. He told her about the murders so Fiz could be let off.

When Kevin and Jason went to the flat, worried about missing Rosie, John fled.

Kevin began chasing him but John crashed his car trying to avoid him.

He was rushed to hospital in critical condition.

Fiz and Hope were allowed to see him before he died.

Who is Jade Rowan?

Jade Rowan is the biological daughter of John Stape, however he never actually knew about Jade.

Viewers were introduced to Jade in 2019.

When John and Fiz’s daughter Hope was kicked out of Bessie Street school due to her behaviour, Fiz took her to a specialist school in Birmingham.

Fiz and Hope met teaching assistant Jade, who got on very well with Hope.

When Fiz and Hope returned to the street, Tyrone failed to get Hope enrolled in Bessie Street and Hope had to be homeschooled.

Fiz called Jade, wanting her to stay with them and be a tutor for Hope.

Jade moved in with the family, but it soon became clear she was trying to turn Hope against her mother.

She even got social services involved, making out Fiz abused her daughter.

It was later revealed to viewers that Jade was John’s daughter.

Jade believed Fiz was the reason John died and wanted to get Hope away from her.

She began turning Hope against her mum and the young girl started to believe her mum was a bad person.

Eventually Fiz found out who Jade really was. Jade told Fiz and Tyrone that although she never met her father, he always sent her letters and birthdays and Christmas cards.

However Fiz made it clear to Jade that John never mentioned having a daughter the whole time she knew him.

After Jade spoke to her mum, she realised John didn’t actually know about her and the letters and cards were all fake.