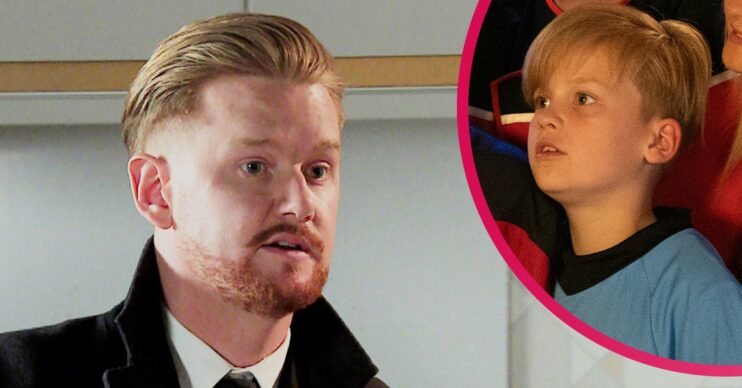 Who is Jake Windass in Coronation Street? Who are his parents and who plays him?

Jake hasn’t been seen a lot over the last few years but is returning to screens soon.

Who is Jake, where does he live and who plays him?

Who is Jake Windass in Coronation Street? How old is he?

Jake Windass is the son of Gary Windass and Izzy Armstrong and he was born on May 27 2013, making him nine years old.

Although Gary and Izzy are his biological parents, Tina McIntyre was a surrogate for them.

Gary and Izzy are no longer together and Gary married Maria Connor in 2020, making her his stepmother.

Jake has a half-brother Zack, who is the son of Gary and Nicola Rubinstein, and Maria’s son Liam is his stepbrother.

Who gave birth to Jake in Coronation Street?

In 2012, Izzy had a miscarriage and did not want to try for another baby as she has Ehlers-Danlos Syndrome and feared it was too much of a health risk.

They decided it would be best to have a baby via surrogate and Izzy’s dad asked Tina McIntyre to be their surrogate in return for £15,000.

She accepted and successfully became pregnant.

However Tina went into labour two months earlier. During labour, Izzy learned Gary made a pass at Tina.

Tina gave birth to a baby boy, who Gary and Izzy named Jake. But Jake had health problems and needed surgery.

Due to Gary and Izzy’s arguing over what Gary had done, Tina refused to let them see Jake.

However Tina started to become attached to Jake and as his health improved, she announced she was keeping him.

Izzy, Gary and their families were furious and wen through legal channels to gain custody.

Izzy eventually gave up the battle, but after a talk with boyfriend Tommy and seeing how much Izzy loved Jake, Tina allowed him to be with them.

Gary, Izzy and Tina eventually sorted things, but in June 2014 Tina was murdered by Rob Donovan.

The couple were shocked to learn about Tina’s death and Izzy was sad to know Jake would never get to know Tina properly.

Who does Jake live with?

At the end of 2014 Gary and Izzy split up and the couple share custody of their son.

During the Covid-19 pandemic, Izzy had to shield due to her health conditions.

Due to filming restrictions on the soap, children weren’t filming due to them needing chaperones on set, so the character Jake wasn’t seen as much.

Jake remained with his mother and hasn’t been seen a lot since the start of the pandemic.

However he appeared in scenes with Gary last year.

In real life actress Cherylee Houston had to shield because of her health issues.

Cherylee was able to film scenes at home and Izzy has been seen on video calls.

Who plays Jake in Coronation Street?

Currently Jake is played by Bobby Bradshaw, who took on the role in 2018.

Between 2013 and 2015, Jake was played by twins Harley and Layton Phoenix.