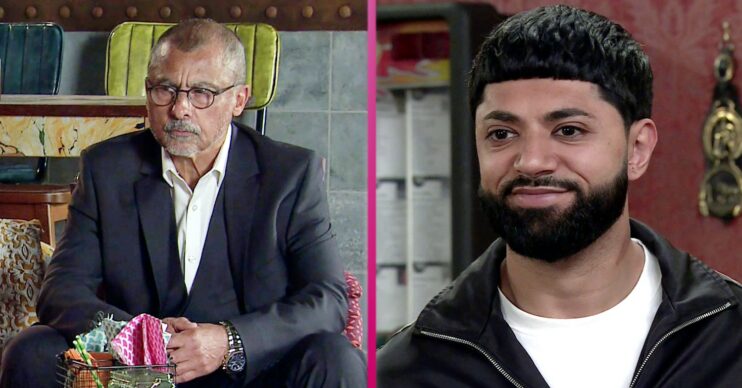 Who is Hashim Elamin in Coronation Street and where have you seen actor Vincent Ebrahim before?

Hashim turned up in Weatherfield

Hashim arrived in Weatherfield in tonight’s episodes of Coronation Street, but who is Hashim and who plays him?

Who is Hashim Elamin in Coronation Street?

Hashim turned up at Speed Daal looking for Zeedan Nazir.

Zeedan told Yasmeen that he use to work with Hashim, but it became clear that Hashim is Zeedan’s father-in-law.

Hashim is the father of Zeedan’s second wife Marrium, who he married last year but is now separated from.

It was revealed Zeedan cheated on his second wife. So what brings Hashim to Weatherfield, what does he want with Zeedan?

Who plays Hashim in Coronation Street?

What has Vincent Ebrahim been in?

Coronation Street isn’t the first soap Vincent has been in.

He also played Ashwin Kumar in the TV series The Kumars at No.42 and The Kumars.

Vincent has also had roles in Clocking Off, Holby City, Meet the Magoons, After You’ve Gone, Doctors, Casualty and Killing Eve.

He also played the voice of Mr Caliche in the film Wallace and Gromit: The Curse of the Were-Rabbit.

What’s next for Zeedan and Hashim in Coronation Street?

Later Yasmeen refuses to let Zeedan take over the financial side of the business.

What is Hashim planning?

Did you recognise Vincent? Leave us a comment on our Facebook page @EntertainmentDailyFix and let us know what you think.