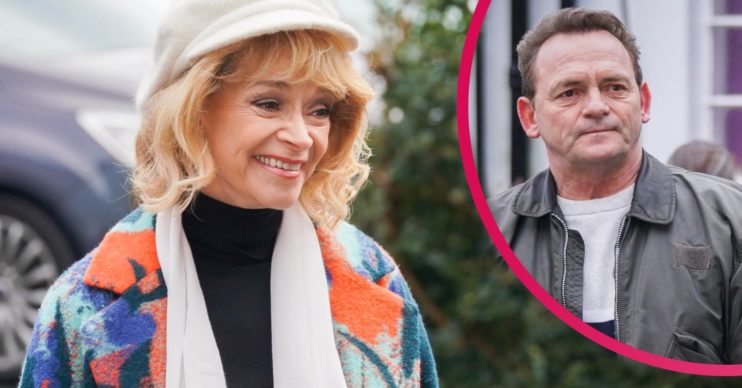 Who is Estelle in EastEnders? Sue Holderness shocks soap fans with appearance

Could Estelle be a new love interest for Billy?

Estelle made her first appearance in EastEnders last night (Monday, April 26) but who is she and who plays her?

Who is Estelle in EastEnders?

In last night’s episode, Billy Mitchell took his daughter Janet to her first photoshoot. He introduced himself to Janet’s agent, Estelle Jones.

But Estelle quickly took a liking to Billy and asked him to go for a drink. Could she be a new love interest for Billy?

Sue famously played Marlene in the legendary sitcom in the 1980s and 90s.

However were shocked by Estelle’s “posh” voice in EastEnders.

Marlene from Only Fools has gone all posh. A league above Billy if she’s thinking of going there #EastEnders

What else has Sue Holderness been in?

In Only Fools and Horses, Marlene was married to Boycie.

The couple regularly propped up the bar at The Nag’s Head with all the regulars like Del Boy, Rodney, Uncle Albert and Denzil.

In that sitcom, Marlene and Boycie had to flee Peckham to get away from the Driscoll brothers. They soon settled on a farm in Shropshire.

Marlene appeared in the show from 1985 until 2003, and then appeared in spin-off The Green Green Grass.

What’s next for Estelle in EastEnders?

In tonight’s episode of the BBC soap (Tuesday, April 27) Honey goes to pick Janet up from the photoshoot and she explains that the other children treated her like a baby.

As Honey comforts her, Estelle approaches Honey and asks for her permission to go on a date with Billy.

Soon another mother approaches Honey and makes a passing comment about how much the children get paid. But Honey is taken aback as the figures don’t add up.

Later this week Honey boldly asks Estelle why Janet is being paid less than the other children but Estelle fobs her off.

Later at Ruby’s, Honey is badmouthing Estelle not realising that Billy and Estelle are on their date overhearing everything.