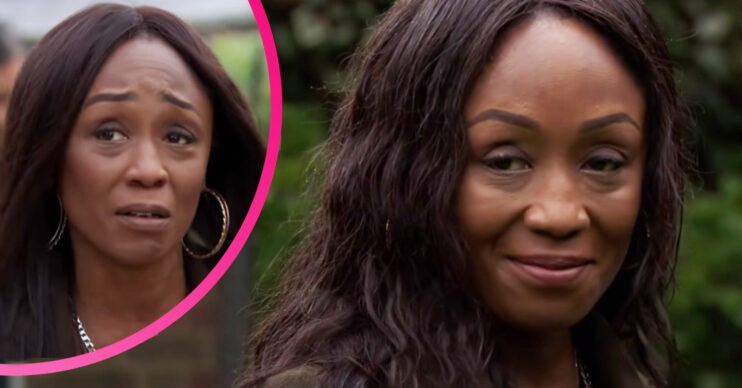 Who is Denise Fox in EastEnders? What’s the story with her and Phil Mitchell?

Denise has survived abusive husbands and even her own funeral!

Denise Fox in EastEnders arrived in 2006, with her two daughters Chelsea and Libby and a whole lot of baggage!

Since then she’s been married twice, had many romances with men in the Square – some better looking than others – and even had a funeral.

Denise has definitely had a role in a lot of the show’s dramas in her time in EastEnders!

Denise has a sister, Kim Fox, and has adopted Patrick Trueman as her father. Her daughter Chelsea recently came back to Walford.

Who plays Denise Fox in EastEnders?

She had actually appeared in EastEnders before she took the role of Denise, as a nightclub singer called Lola Christie.

Before joining EastEnders, Denise played Eva Sharpe in The Bill and its spin-off MIT: Murder Investigation Team, as well as appearing in Lovejoy and Babyfather, for which she won a Best Actress Award at the RTS awards.

She was the first black actress to win a major RTS award.

Diane has two daughters with her ex-partner and got engaged to Gerry Zuccarello in lockdown last year.

Who has Denise Fox been married to in EastEnders?

When she arrived in the Square, Denise had two ex-husbands and they were both trouble.

But she got together with Kevin Wicks and the pair settled down. Before long, though, Denise’s ex, Owen Turner – dad to Libby – arrived and immediately stirred things up.

He had been abusive and hadn’t changed. When he tried to kidnap Libby, he was arrested and sent to prison.

Read more: Who is Rainie Highway in EastEnders?

Denise and Kevin got married, and they were happy for a while until Kevin got involved with the Mitchells and died when he was trying to destroy some dodgy cars.

Heartbroken Denise left the Square, and when she returned she wasn’t pleased to discover her daughter Chelsea had got back in touch with her dad, Lucas.

What happened with Denise and Lucas Johnson?

Lucas was a former drug addict, turned preacher, and he was adamant he’d changed.

Denise fell for his charms and proposed, but he was already married to Trina.

And when Trina and Lucas met up, he accidentally killed her – putting him on to a demonic path into the EastEnders history books.

Everyone thought Trina had died from an overdose, and with her dead, Lucas and Denise began planning their wedding.

But when Owen was released from prison and started making trouble, Lucas killed him, too!

When his body was discovered months later, Lucas confessed to Denise. And as if that wasn’t enough, he kidnapped her.

Viewers – and everyone in Albert Square – thought Denise was dead.

Lucas murdered a prostitute and identified her as Denise, and held a funeral for her.

Lucas reared his head again when he was released from prison earlier this year and showed up in Albert Square. Thankfully, he’s now back inside.

Who else has Denise Fox dated?

Since recovering from her ordeal, Denise Fox has had some intimate encounters with the much-missed Fatboy, as well as Kush Kazemi.

She also dated Ian Beale. That relationship ended when she found out he’d slept with Rainie Cross, now Rainie Highway, on the night his daughter Lucy was murdered.

And Den is now happily coupled-up with Jack Branning, despite his brood of unruly children and, in fact, her own unexpected arrival.

What went on with Denise and Phil Mitchell?

Denise had a drunken one-night stand with Phil Mitchell, before she got together with Kush.

Phil didn’t remember their night together, and Denise wanted to forget all about it. But she later discovered she was pregnant and Phil was the daddy.

She had the baby in January 2017 – a boy – and put him up for adoption. Phil, who’d found out he was the dad, objected at first, but later agreed. The little lad’s adoptive parents named him Raymond.

In September 2020, Raymond’s parents and sister were killed in a car accident. When Denise heard about the crash, she sneaked into the hospital to see her son and met his grandmother Ellie Nixon.

Phil began visiting Raymond, too, and the boy’s parents began to bond with him.

It turned out that Ellie was a nasty piece of work with more criminal contacts than the Mitchell family and an eye for a deal. She tried to sell the little boy to Phil.

Phil, Denise and Jack managed to double-cross evil Ellie and get Raymond back to the Square.

Denise and Jack split for a while over the custody battle, but are now reconciled. Though Denise doesn’t want Phil to spend too much time with his son, it seems Phil has other ideas.