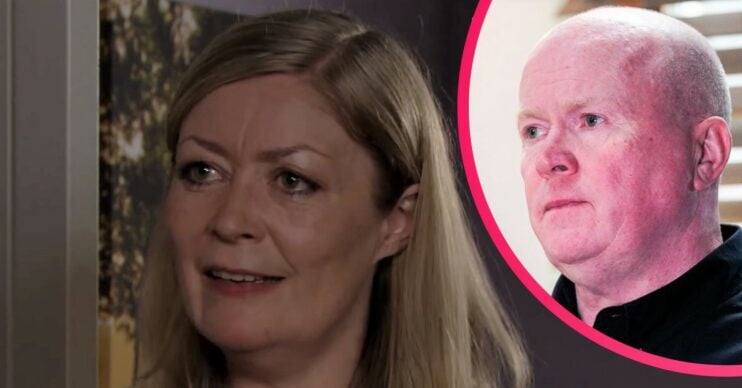 Who is DCI Keeble in EastEnders? Why does she want to bring Phil Mitchell down?

She's back and she's out for Phil's blood!

The infamous DCI Keeble returned to EastEnders tonight, but who is she? And why does she want to bring Phil Mitchell down?

Phil was in the interview room at the police station after he handed himself in for his involvement in Vincent’s death.

His solicitor Ritchie Scott was hopeful the DCI they’d send to investigate him would be a new kid on the block and not gunning for Phil’s blood.

But they were left disappointed – and shocked – when old nemesis Keeble entered the room.

It’s clear she’s out to get Phil, but will she succeed? Is Phil going down for life?

Who is DCI Keeble in EastEnders?

DCI Samantha Keeble first appeared in EastEnders in 2008 when she was investigating the hit and run of Max Branning.

She locked horns with Max’s wife Tanya over interviewing their young daughter Abi, and it was clear Keeble was a formidable force.

The officer returned in 2014 when she took over the investigation into Lucy Beale’s murder.

She was convinced Max was the killer and eventually found enough evidence to arrest him for murder.

Max tried to tell the cops Bobby Beale was the real killer, but he was dismissed and sentenced to 21 years.

However, when Bobby confessed, Keeble was reluctant to open the case again. She was eventually forced to when Bobby revealed he still had the murder weapon.

Keeble was stunned when she discovered Ian Beale had known Bobby was the killer. However, she chose not to do anything about it, saying everyone made mistakes in the investigation and the case was closed.

Who plays DCI Keeble in EastEnders?

Keeble is played by Alison Newman.

The 53-year-old actress is best known for her role as Hazel Bailey in Footballers’ Wives, the ruthless lesbian football agent and later club chair.

She has also appeared in Bad Girls, Rocket Man for BBC One, Rock Rivals, and Call The Midwife.

Alison has appeared extensively in the theatre and also co-created the ITV series Harlots.

It’s not known how long she’ll reprise her EastEnders role for this time.

Is Phil Mitchell going down?

Having Keeble against him certainly doesn’t make it look good for Phil – even with super-solicitor Ritchie Scott in his corner.

On Thursday, January 6, Ritchie told Phil they had recovered a phone from the Arches with incriminating evidence on it.

He brushed it off as a five year stretch, but his lawyer told him if they got enough evidence, Phil was looking at spending the rest of his life behind bars.

When Keeble walked into the room on Friday, January 7, Phil’s face fell: “They made you a DCI then?” he asked.

“Working the Lucy Beale murder case will do that for you. I’m sure you remember,” she replied.

“And I don’t plan on stopping there because putting you away for life has got promotion written all over it.”

Phil insisted she needed evidence to send him down, but she stunned him into silence when she told him: “Aidan Maguire and DCI Alsworth talked.

“And they had plenty to say about you. None of it good.”

So it looks like the police might just have enough to put Phil away for a very, very long time.

Unless there’s more to it?