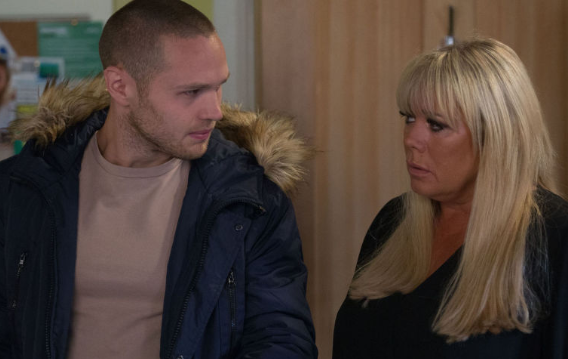 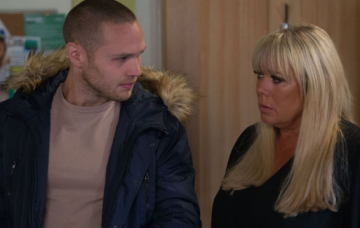 Who is blackmailing Sharon and Keanu? – Top Suspects

There are quite a few names on the list...

If you watched last night’s EastEnders you will have seen Sharon Mitchell and Keanu Taylor panicking about their secret affair being exposed. Sharon has been having an affair with much younger Keanu while husband Phil is abroad. In the latest episode, the lovers both received texts from a mystery blackmailer.

The blackmailer had got their hands on incriminating evidence of the pair romping in The Arches last week after Sharon accidentally left one of her contacts a saucy voicemail.

Yesterday we saw her teen boyfriend receive a message before looking panicked; Sharon then received another text warning her to end things or Phil will find out.

The terrified couple stood at the window and looked out at some of the residents of Albert Square trying to figure out who knows their grubby secret.

But who is it? Here are the best fan theories!

Sharon originally suspected Hunter after the first text message was sent. Mel’s son has a history of trying to wind up Phil so we’re sure he would get a kick out of blackmailing Sharon. She later discovered Hunter’s mobile phone was broken… but could he just be trying to cover his tracks?

Louise, Sharon’s step-daughter, came very close to catching Keanu and Sharon just a few weeks ago. Luckily for them, the teenager was too busy paying attention to her mobile phone to see that Keanu’s trousers were unzipped. However, if she got hold of the voicemail, it’s understandable that she might blackmail the pair to protect her father. Fans seem to think Louise is the one responsible.

Keanu’s loyal sister Bernadette would do anything to protect her family members. The school girl does come across as having a kind nature but we wouldn’t put it past her to blackmail the pair if it meant protecting her big brother from a Phil Mitchell pummelling.

Although Hayley seems to have a lot on her mind with her pregnancy (and the baby’s father being her cousin’s husband), we wouldn’t rule her out as a potential suspect just yet. Before Sharon and Keanu began their affair it seemed like Hayley’s friendship with him could blossom into something more romantic. Could Hayley be blackmailing them to bring Keanu’s attention back to her?

Sharon’s son Dennis seems to be landing himself in trouble regularly – he’s got himself mixed up with gangs, and has been hiding stolen goods for them. It seems like little Denny is easily led! Dennis sees Phil as a father figure and has become close to Keanu after he helped him out with his gang troubles. Could the idea of his mum cheating on his step-dad drive the young lad to blackmail?

Many viewers think Keanu’s mother Karen could be behind the blackmail. Like her daughter, she would do anything to protect her family. The only thing that may cancel out this theory is that she’s due to spot the pair kissing next week and judging by the pictures, she’s very shocked by what she sees. However, we won’t be ruling Karen out as a suspect just yet and neither are EastEnders fans.

It’s surely got to be Karen texting Sharon about her affair with Keanu?! #EastEnders

Phil Mitchell has been in Spain for the past few weeks. Sharon started the affair shortly after her husband left. Could she have sent the voicemail to Phil by mistake and he’s now getting his revenge on the pair by blackmailing them?

Who do you think is blackmailing Sharon and Keanu? Leave us a comment on our Facebook page @EntertainmentDailyFix and let us know what you think!