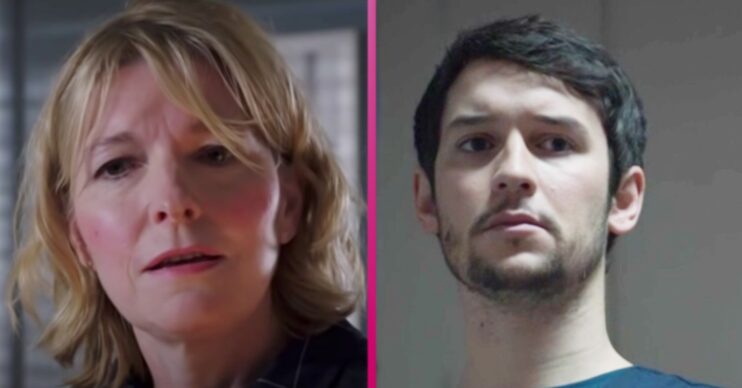 Who is Bernie Wolfe in Holby City and why does everyone think she died?

Bernie Wolfe returned to Holby City and it was revealed she was alive after being presumed dead for two years.

Last week, killer Cameron was shocked when he thought that he spotted his mother and ended up being run over by an ambulance.

However in tonight’s episode (Tuesday, September 7) it was confirmed that it wasn’t Cameron’s imagination and Bernie is alive.

Who is Bernie Wolfe and why did everyone believe her to be dead?

Who is Bernie Wolfe in Holby City?

Bernie first appeared in Holby in February 2016 as a consultant general surgeon.

She is also the mother of Cameron Dunn and has a daughter named Charlotte.

Bernie is played by Jemma Redgrave.

Bernie began a relationship with Serena Campbell when working at the hospital but the two did eventually split.

What happened to Bernie Wolfe?

In 2018, Bernie left Holby to work in the army as a soldier.

However the following year, Cameron received news his mum had gone missing in action.

Bernie had been caught up in an explosion at an airport hospital and was believed to have been killed.

Over the years, Cameron began committing crimes. He killed Chloe’s rapist Evan Crowhurst, however when Xavier Duvall found out his involvement and found evidence, he went to take it to police.

Cameron followed Zav, but he was hit by cyclist, Bobby Evans. He fell to the ground and hit his head on the pavement.

Instead of helping, Cameron took Zav’s bag with the evidence and fled. Later Xavier died.

Months later, Bobby was brought into Holby and recognised Cameron from the scene.

Read more: EastEnders: Why has Janine come back as Judith Bernstein and when did she use her before?

Cameron went on to kill Bobby and Chloe became suspicious of her colleague.

As well as taking the credit for saving patient’s lives that he didn’t save, he has had a hand in the deaths of other patients including Harvey Dean.

Earlier this year, after kidnapping Ange Godard, Cameron was arrested.

He was brought back to the hospital in recent episodes for a stent trial. However after escaping he set up a bomb in the hospital’s basement.

Where has Bernie Wolfe been?

As Bernie returned, she explained that after the explosion they found her body armour.

She had been shot during the explosion. Although her body armour had been found, the blood they found belonged to her colleague, who died in the explosion.

Read more: Scott in Silent Witness: Where have you seen Elliot Tittensor before and who is actor brother Luke?

Bernie explained she had been kidnapped by militia who needed a doctor.

However she was rescued.

Bernie admitted to Cameron that she was rescued a year ago and had been living in Spain with Serena since.

Is this the last we will see of Bernie?

Have you been watching Holby City? Leave us a comment on our Facebook page @EntertainmentDailyFix and let us know what you think of this story.