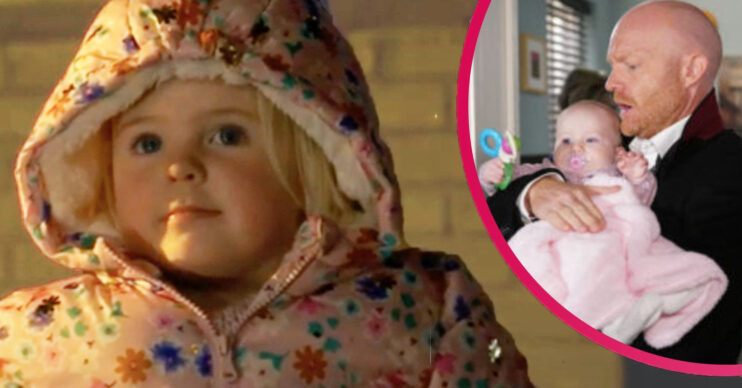 She's had a lot of drama in her short life!

Abi Branning in EastEnders had lost both her parents by the time she was born. Her mother, also called Abi Branning, died in a horrific accident, and father Steven Beale died in a fire.

Abi was born into two of the Square’s most iconic families – the Beales and the Brannings. And she’s been right at the centre of some heartbreaking stories in her short time in the show.

When baby Abi’s mum had an affair with Steven Beale it started a dramatic downward spiral for the Branning family.

Abi and Steven, who was engaged to Abi’s sister Lauren at the time, planned to run away together. But Steven was in a bad place himself, and after firstly faking a brain tumour, then setting fire to Ian Beale’s restaurant. After a dramatic confrontation in the flames, Steven died leaving Abi heartbroken.

How did Abi Branning die?

At Christmas in 2017, Abi and Lauren were about to leave Walford to start a new life with their mother Tanya. But Abi spotted dad Max on the roof of the Queen Vic and worried he was planning to jump, she went after him. Lauren went after Abi and the pair both plunged from the roof.

Abi never woke up. Her daughter was delivered and then Abi was pronounced brain dead. Her baby girl was named Abi too. Heartbreaking stuff.

Abi has to be the most fought-over baby in the history of the show. Since her mother, also called Abi Branning, tragically died, the littlest member of the Branning brood has been the subject of a long, drawn-out custody battle.

Firstly  her great-grandmother Cora Cross took on Abi’s grandfather Max Branning and great-aunt Rainie Highway to get her mitts on the tot.

Max and Rainie pretended to be a couple, thinking that would improve their chances of getting custody of the little girl. They even got married, to prove they were responsible parents – despite their distinctly dodgy pasts.

Read more: Who is Rainie Highway in EastEnders? Did she really have a fling with Ian Beale?

What did it in the end, though was Cora trying to bribe Rainie. She offered her a wedge of cash to take Abi and bring her up with Cora and Rainie’s sister, Tanya. Rainie took the cheque but showed it to the social worker and Cora admitted defeat.

But it wasn’t over. There were more bumps along the way and once Max and Rainie became Abi’s guardians, they – along with Rainie’s husband Stuart Highway –  argued over which of them would be the best parent to the little girl.

Max even refused to divorce Rainie for a while, not wanting Stuart round his grand-daughter.

Since then, though, the little girl has spent time with Max and Rainie.

When Max’s romance with Linda Carter fell apart, he decided to leave Walford for good. He planned to take little Abi with him, but at the last minute he changed his mind and left her with Rainie.

But when Jack returned he came back alone. And he shared the shocking news that Max had disappeared with the tot.

Will little Abi ever return to Walford?