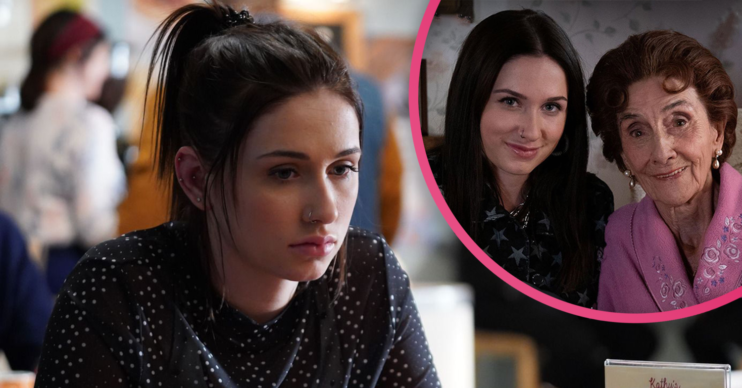 Who plays Dotty in EastEnders and what is going to happen to her?

Two actress have taken on the role to date

The soap is going off air indefinitely after running out of episodes due to lockdown restrictions.

But BBC bosses are ensuring the soap goes out with a bang as Dotty is arrested.

But who plays Dotty in EastEnders and what exactly happens this evening?

Who plays Dotty in EastEnders?

Previously, Molly Conlin portrayed the character from 2008 until 2010.

The character then left the soap but returned in 2019 which is when Milly took the reins.

Read more: EastEnders’ Tameka Empson will return for spin off show Secrets From The Square

Dotty is of course the granddaughter of Walford legend Dot Cotton, and daughter of the late Nick Cotton.

If viewers recognise Milly, it may be from her last TV role – Hannah in CBBC comedy series All At Sea.

What has Milly said about Dotty’s blackmail storyline?

Since her return to Walford, the character has been at the centre of a huge storyline, blackmailing Ian Beale.

According to Milly, she won’t be keeping his secret forever.

Read more: Sonia tries to locate her father in EastEnders

During an interview with the Metro, the actress said: “She is blocking out the real tragedy – she did have a soft spot for Denny and they did work together.

“She has been through death herself with her dad, she thinks she would want a know and that Sharon has a right to know.

“It’s bound to happen at some point…”

What happens to Dotty in Eastenders?

Dotty has a pretty rotten final episode to be perfectly honest.

Just as things are finally looking up for her blossoming romance with Peter Beale, he dumps her.

Although he admits does have genuine feelings for Dotty, Peter’s dad Ian guilts him into ending the relationship.

He points out that his little brother Bobby has a huge crush on Dotty and can’t handle seeing them together.

This leads Peter to put his family first and call it a day.

Hurt by his decision, Dotty goes into self-destruct mode at Ruby’s nightclub.

When two police officers arrive asking to take look inside her bag, she tries to run away after striking one of the coppers.

But all doesn’t go to plan and she is arrested.

As she’s led away, a smirking Ian turns up just in time before telling here: “Dumped and arrested? Not your day is it?”

No doubt someone will be out for revenge when EastEnders returns.

Where is Dot in EastEnders?

Dot has left Walford for good.

She last featured on the show in February earlier this year – although didn’t actually appear on screen.

The Albert Square veteran left a voicemail for her step-granddaughter Sonia, revealing she had moved to Ireland.

Unfortunately, this means she won’t be around to help Dotty any time soon.

During an interview with podcast Distinct Nostalgia, the actress insisted she would not be returning to the show.

She said: “I’ve left for good.

“I’ve sent myself to Ireland and that’s where she’ll stay. I’ve left EastEnders.”

However, BBC bosses have said that the door remains open should she change her mind.

BBC bosses have not yet confirmed when the soap will return.