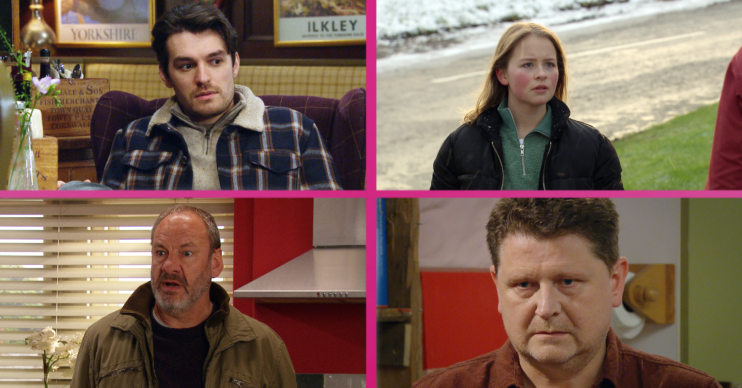 Who dies in Emmerdale next week? Bookies release their favourite odds

There is a big stunt coming up!

Emmerdale recently confirmed a character will die in upcoming scenes as the soap airs it’s first socially-distanced stunt, but who dies in Emmerdale?

In upcoming scenes, Liv confronts Paul in the wedding barn after finding out the truth from Connor.

Meanwhile Jimmy King is behind the wheel of a truck and struggles to breathe, feeling stressed. He is blinded by the glare of the sun and loses control and soon braces himself for impact.

The ITV soap has revealed Jimmy’s truck will go off the road at speed, ploughing into farming buildings.

What will follow are a series of explosive events. These will lead to the untimely death of at least one character. But who?

Who dies in Emmerdale next week? Bookies release their favourite odds

Ladbrokes has released their odds on who they think will be killed off in the upcoming scenes.

Jessica O’Reilly of Ladbrokes said: “Emmerdale fans wouldn’t be too sad to see Paul exit the show, and the odds suggest his downfall may result in his death.”

Emmerdale fans wouldn’t be too sad to see Paul exit the show, and the odds suggest his downfall may result in his death.

Bookies Betfair has also released their odds to Entertainment Daily.

Who do you think will meet their end?