The fight for baby Alfie results in a huge car accident

The custody battle for Alfie could turn deadly as Abi Webster and Imran Habeeb go head to head for the little boy.

But as she plans to flee the cobbles and he plans to confess, things all come crashing down – quite literally – when there’s a huge car smash.

Will they all make it out alive?

And what does the future hold for those left behind?

Read more: Coronation Street is bringing back a whole host of favourite faces in 2022 – but who?

Who dies in Coronation Street?

All Toyah wants is to be a mum.

And it seems she’s lost sight of her morals to get there.

She so far seems oblivious to the tactics Imran is using to get custody of Alfie, but who’s to say she wouldn’t go along with it if she did know?!

The week begins with a flashforward to Imran leaving a message for Toyah confessing everything he’s done.

There is then a horrific car crash involving the newlyweds.

He pulls her from the wreckage, but she’s unconscious and in a bad way. As he begs her not to die, has Imran inadvertently killed his wife?

Will Toyah pull through? Or will her death lead to his heartbreaking exit as he leaves the memories of his dead wife behind?

Co-star Michael Le Vell confirmed the news on This Morning on Friday, May 27. But how will he depart?

Let’s face it, Imran’s made a right royal mess of everything, hasn’t he?

As he confesses what he did, emotions are running high, and he’s involved in the vehicle smash. Is that the end for him?

Or will he go on the run after causing Toyah’s death?

Is he set to lose everything?

Preparing to flee with little Alfie, Abi soon realises her attempts might be fruitless.

As she faces up to the future, Kevin surprises her, saying he still loves her and wants them to get back together.

He insists they will fight for custody of Alfie together.

But that’s all a bit happy for Abi, isn’t it?

Could she be involved in the crash and lose her life? Will she decide to run away from Weatherfield after all and collide with the car?

Or is she finally set to get her happy ending?

Actress Sally Carman, who plays Abi, told This Morning viewers on Friday: “I think maybe there’s [a happy ending] on the horizon,” before stopping herself and saying: “I can’t say any more!”

Determined not to mess things up with Abi again, Kevin vows to fight by Abi’s side.

But as he was the one working on Toyah and Imran’s car before the crash, has he tampered with it?

As the local mechanic, will Kev rush to the wreckage and be caught up in an explosion? Or trapped as he tries to help free Toyah?

Or could Kev just end up arrested and in a whole heap of trouble for endangering the lives of others?

Imran is forced to face up to what he’s become by former foster daughter Kelly Neelan. But will she pay with her life?

Knowing exactly what he’s been up to with Ben, Kelly insists Imran has to confess.

Could she be caught up in the accident too?

She’s later interviewed by the police over the crash and reveals Imran was on his way to confess everything.

So she seems fine, but could that be a ploy? Will she collapse later in the week after suffering internal injuries?

Kev’s ever-loyal sister isn’t involved in the action that we know of, but she’s never far from Kev’s side, defending him and doing all she can to support him.

And in the trailer released by Corrie last week, she’s shown shouting and looking distraught.

Is she somehow caught up in the crash?

Could Debbie unwittingly lose her life trying to save her brother?

Adam Barlow is also in the trailer video.

He’s on the phone and shouting, looking disheveled.

He’s Imran’s mate and business partner, so it stands to reason he wouldn’t be far away.

But will he get caught up in the commotion and end up dead?

He’s just survived one brush with death, but a cat only has so many lives… 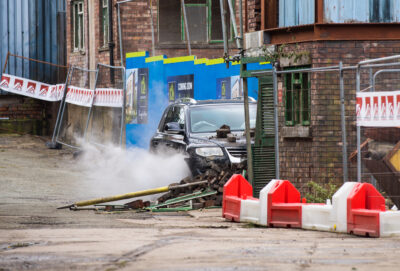 Who gets baby Alfie?

It’s the question on everyone’s lips: Who will end up caring for the tot?

Will Toyah finally get the baby she’s so desperate for?

Will Abi get her second chance to be a mum?

Or will Imran steel away with the baby, and leave a complete mess behind him?

When is Coronation Street on next week?

In a change to its transmission pattern, Corrie will air every day next week.

Starting on Monday May 30 running through to Friday June 3, we’ll visit the cobbles at 7.30pm.

Each episode will be half an hour.

The change also means Emmerdale will move back to its former time slot of 7pm every night.

It’s all to work around the Britain’s Got Talent Semi Finals which will air at 8pm every night next week ahead of the grand final.