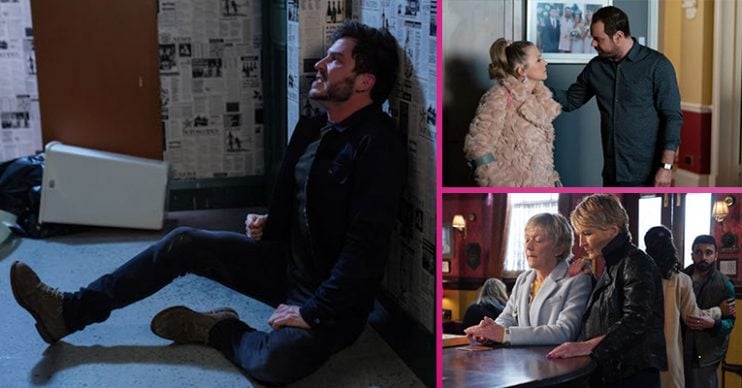 Which days is EastEnders on this week?

Here's when you can catch all the Walford action this week

There’s a schedule change to EastEnders this week as we’ll get a double bill on Thursday and no episode on Friday.

The week’s stories see not one, but TWO shock proposals.

After Lola’s baby bombshell, Jay decides popping the question is the best way to prove he’s serious about their future.

But as he rehearses the big moment with Lexi, what will Lola say when he actually gets down on one knee?

Elsewhere, Rainie is shaken when an ex ‘client’ turns up at the funeral parlour and Stuart wants to reassure her he doesn’t care about her past.

After much consideration he decides to ask her to marry him, but will she say yes?

Here’s when you can catch these storylines and more the week commencing Monday March 9, 2020.

Gray heads to The Vic after warning Chantelle not to tell her parents he’s been suspended.

Sensing his mood, Chantelle gets Karen to babysit and when Gray returns he learns his firm has dropped Whit’s case.

As he takes his anger out on Chantelle, she convinces him to represent Whitney without the backing of his firm.

Jean is determined to find out if Suki is lying about her cancer and catches her out when she invites her to a cake sale.

But it doesn’t deter her as she later accuses Suki at The Vic, leaving Kheerat, Jags, Vinny and Ash disgusted.

However it soon becomes clear Kheerat and Ash have their suspicions, and later Kheerat calls Suki’s bluff…

Mick is still concerned about Linda, despite the progress she’s been making.

When Tina mentions Linda cleared out her alcohol stash, Mick decides to double check everywhere too.

Linda catches him and is hurt that he doesn’t trust her.

She promises to keep it a secret and Jay gets the assurance he needs from Billy as he prepares himself to pop the question.

An ex ‘client’ arrives at Cokers and Rainie is shaken by his presence, but Stuart reassures her.

They later have dinner at Walford East, but the mood turns when Mick and Linda arrive and Linda’s attitude annoys Rainie.

Linda’s words set Rainie back and she finds herself opening up to Stuart about her past.

Meanwhile, Jay rehearses his proposal on Lexi, but when Lola arrives they’re quick to cover.

Lola returns home later to a romantic lunch and is gobsmacked when Jay pops the question. What will she say?

Also, Chantelle suggests to Gray she returns to work, but is later upset when Denise reveals she no longer needs her full time.

After an offer of work from Kheerat, will she be forced to accept? And will it anger Gray?

Chantelle feels the pressure to go to work so takes Kheerat’s offer, but with Gray’s temper flaring, will this make it worse?

Meanwhile, Mitch has realised something’s going on with Gray when Jack mentions he saw him going into a hotel.

Mitch is intrigued and quizzes Gray, who vents to Chantelle and she’s forced to calm him down.

But Mitch is convinced he’s worked out what Gray’s hiding: he’s having an affair.

Will Mitch uncover the truth?

Linda is heading off to another meeting and Mick is proud of her.

When Stuart spots her and sees she’s doubting going in, he offers his support.

But when Isaac overreacts during a game of air hockey, Patrick tries to calm him down.

Mitch is determined to find out what Gray is up to and follows him.

However, Chantelle stops her dad and asks him to back off. Mitch doesn’t listen though and heads to Gray’s office.

Once there, he’s shocked to discover Gray’s been suspended.

Mitch seeks out Gray and offers him some money, admitting he ‘knows everything’.

Gray is seething and takes it out on Chantelle, sure she must have told her dad.

At The Vic later, Gray realises he was wrong for accusing Chantelle when the Taylor-Bakers throw him a party and he’s mortified.

Back at home, Chantelle is recovering from her latest set of injuries at the hands of her husband.

Elsewhere, Stuart is at a loss over how to cheer Rainie up.

After some advice from Callum and overhearing Jay and Lola talking, Stuart comes up with a plan: to propose to Rainie. What will she say?

Also, the reason behind Isaac’s outburst is revealed.

No episode due to Sport Relief.