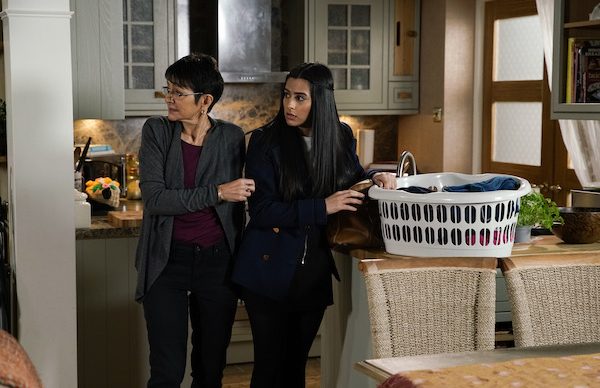 Which days is Coronation Street on this week?

Here's when can you catch the soap on screen

This week’s Coronation Street sees Alya beg Yasmeen to leave abusive Geoff and even report her gran’s husband to the police.

But will Yasmeen get away?

And Gemma is really struggling. Will the return of her mum, Bernie, make a difference to her state of mind?

Here’s when you can catch these stories and more in Corrie the week commencing Monday March 16, 2020.

Alya’s deeply shocked when she finds out Yasmeen and Geoff are selling their shares in Speed Daal.

She calls at No.6 and demands an explanation, so Yasmeen reveals she and Geoff are moving to Cyprus.

Horrified Alya says it’s clear Geoff is abusing her and trying to isolate her.

Determined to rescue her from Geoff’s clutches, Alya grabs some of Yasmeen’s clothes and starts packing them into a bag – just as Geoff returns…

A frazzled Gemma has had no sleep, and is shocked when she answers the door to Bernie.

Casting her eye over the mess, Bernie can see her daughter isn’t coping, but Gemma insists she’s fine. Will Bernie believe her?

Emma tells Seb her mum’s offered to pay for them to visit Australia, but Seb’s not keen and Emma’s disappointed.

Elsewhere, Claudia signs Ken up for a talk to the literary society at Stillwaters, and Evelyn plans to take a poorly Cerberus to the vets.

Geoff wants to know where Yasmeen is going, but Alya steps in and calls him a control freak.

Alya begs her gran to leave Geoff, but will she agree?

Later, with Toyah by her side, Alya goes to the police, convinced Geoff must have a history of abuse.

Having seen Norris, Ken is pleased an old face is living at Stillwaters.

But at the bar, Norris tells Ken he hates it there and begs him to help him escape!

At the vets, Evelyn is stunned to see her old flame Arthur.

Tyrone can see they clearly still like each other, leaving him amused.

Bernie’s concerned about Gemma and at baby senses class Gemma introduces her new friends to her mum.

Vanessa and Imogen tell Gemma they can’t meet up as they have plans, but when Gemma hears a party coming from Imogen’s house, she’s upset to realise she’s been lied to and left out.

She’s secretly delighted when he shows up with his dog and they flirt.

Maria advises Emma to play hard to get when she reveals her relationship with Seb isn’t going well.

Emma sends him out so she can hang out with the girls, but her plan may have backfired when he sees Alina in the pub and offers to buy her a drink…

Also, Alya discovers that Geoff and a past girlfriend were charged with causing affray.

She barges into No.6 and insists Yasmeen read the article about Geoff’s past, begging her gran not to move away with him. Will Yasmeen listen?

Yasmeen decides to confront Geoff about what Alya found out and nervously asks him about Jocelyn Barrie, the woman he fought with.

A raging Geoff throws Yasmeen’s plate of curry off the table and slams out of the house.

Yasmeen scrubs curry off the carpet in tears, while Geoff is seen at a restaurant in town…

Meanwhile, Bernie tears a strip off Imogen for lying to Gemma.

But her fears grow when she sees Gemma standing guard over the babies’ cots and begs her daughter to see that she needs help.

Also, Seb fights his feelings for Alina, and Evelyn and Arthur reminisce about old times, revealing they would have married if circumstances were different.

Is this their second chance?

Gemma’s pleased when Imogen and Vanessa apologise and invite her for lunch.

They ply her with prosecco, but then she hears them being mean about her and storms out, upset.

Emotional Gemma fails to spot an oncoming car, which screeches to a halt, narrowly missing her and the buggy.

When the police realise Gemma’s been drinking she face some tough questions.

Gemma finally breaks down to Bernie telling her how much she’s struggling and Bernie begs her to tell Chesney. Will Gemma admit she needs some help?

Evelyn has a date with Arthur and asks Claudia to do her hair and make-up.

But Evelyn’s horrified to see Claudia’s made her look just like her!

After wiping most of it off, Evelyn waits for Arthur in the Rovers, but will she be left disappointed?

Elsewhere, Yasmeen’s furious when she finds out Alya’s reported Geoff to the police and begs her granddaughter not to make her choose.

Geoff, who’s been out all night, finally returns and tells Yasmeen he’s the victim here and all he does is because he loves her.

Yasmeen assures him she wants to be with him, but asks that they delay their move to Cyprus. How will Geoff react?