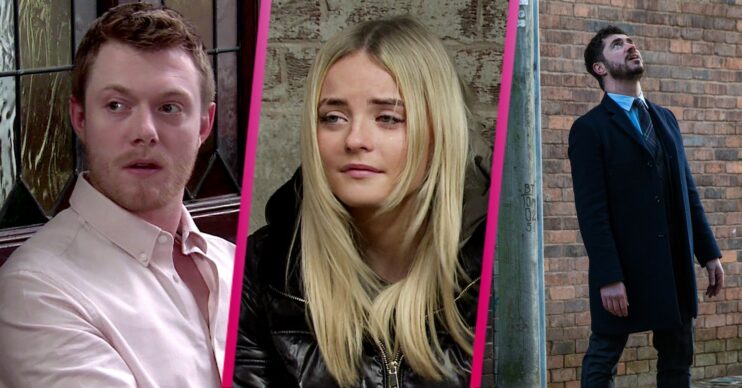 Where is Coronation Street set and filmed? What happened to the old set?

Coronation Street got a new set eight years ago!

The set of Coronation Street is almost as iconic as the show itself. With the cobbled streets, backstreet boozer, and local shops and eateries, you’d never fail to recognise it.

Since the show started in 1960, the set might have moved locations in the real world, but the backdrop has remained the same.

The Rovers Return and the corner shop have always been there. Underworld, the factory owned by Mike Baldwin originally and subsequently taken over by the Connor family, is also a long-standing business.

When the show went to six episodes a week in 2017, the set was expanded to include Victoria Street, which was to open possibilities for a number of new storylines.

Here’s a look at the real location of Corrie.

Where is Coronation Street filmed?

Since 2014 the show has been filmed at MediaCityUK in Manchester.

The studios sit on the banks of the Manchester Ship Canal in Salford and Trafford.

Where is the old Coronation Street set?

Prior to this, Corrie was filmed at Granada Studios on Quay Street.

When the show moved homes, a brand new set was built that was an exact replica of the old one.

The old set was dismantled and destroyed in 2018, making way for other buildings in the sought-after part of Manchester city centre.

What will you find on the Coronation Street set?

Of course, the most famous landmark on the Corrie set is the Rovers Return. It’s been there on the corner since the show started in 1960, when it was run by Annie Walker.

And not to mention Preston’s Petals, run by Tracy Barlow, and Streetcars owned by her other half Steve McDonald and his mate Tim Metcalfe.

Audrey’s salon is still there, however it has been shut for quite some time.

What new businesses were added to Coronation Street in 2014?

When the show went to six episodes a week in 2017, the set was expanded to include nearby Victoria Street.

A tram station was built – the Victoria Street Metrolink, and a police station was needed given all the crimes committed in Weatherfield!

In 2019, Trim Up North barbers was opened. It is owned by Audrey Roberts and managed by Maria Connor.

Audrey’s grandson David Platt works in there as a hairdresser and Kelly Neelan is an assistant.

Branded shops arrived too, with Costa Coffee and the Co Op opening branches under the famous Corrie arches.

There’s a tattoo parlour and a snooker hall as well, plus Speed Daal, an urban community garden, and a couple of empty units yet to be taken over.

Where are Coronation Street’s interiors filmed?

Although when the new set was built it was built to a bigger scale than the Granada Studios set, the interiors are still all filmed indoors in studios.

The buildings you see on Coronation Street are just empty fronts.

Is there a new part of the set being built?

Earlier this year it was announced Coronation Street would be making a huge expansion.

Development for the Weatherfield Precinct began in March 2022 and it was revealed it would take six months to complete.

The impressive new two-storey construction will feature maisonettes and a staircase as well as a balcony leading to the properties.

It will also have a piazza and a series of accessible local shops and units.

Can I tour the Coronation Street set?

Yes! It might be a fictional street, but you can still go and have a behind-the-scenes look at the set itself.