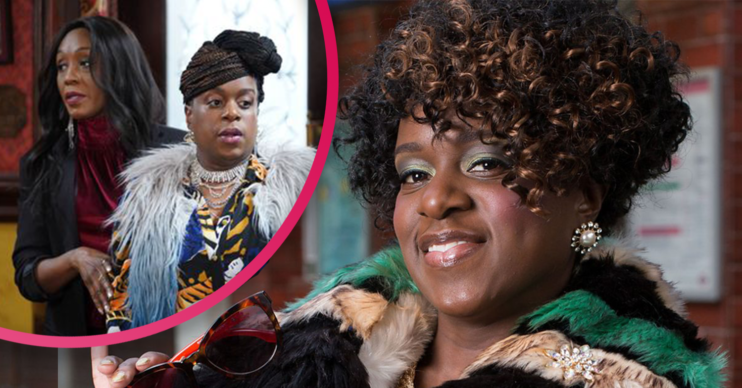 When is Kim coming back to EastEnders? Tameka Empson returns to Albert Square tonight

She’ll back on the box with her on-screen sister Diane Parish aka Denise Fox.

Unfortunately, neither will be in character.

Instead the duo are teaming up with Stacey Dooley for an episode of EastEnders: Secrets from the Square.

But when is Kim coming back to EastEnders?

When is Kim coming back to EastEnders?

Tameka will be back in Walford as her alter-ego Kim Fox by the end of the year.

During an appearance on Loose Women, the star explained that an exact date hasn’t yet been confirmed for her return.

Read more: Coronation Street, Emmerdale and EastEnders characters that need to be brought back from the dead

However, she reassured fans that “by the end of the year [I’ll be back]!”

EastEnders has confirmed that the cast have now resumed filming.

Diane is already back in the studio with Tameka set to soon follow.

Speaking on ITV’s This Morning, Sharon Marshall, the show’s soaps correspondent, said: “The great news is that Tameka is going to be back filming soon.

“I don’t think she’s been on the set since last year, and I’ve really missed the sisterly relationship between Denise and Kim.”

Fans are hoping Tameka will reveal more on EastEnders: Secrets from the Square later this evening.

Why did Kim leave EastEnders?

After confirming she was taking a break from EastEnders, Tameka never explained why.

But it turns out, Tameka has been on maternity leave.

During an appearance on Loose Women last week (July 16), the star revealed she had given birth to a baby boy during lockdown.

When asked why she’d kept her pregnancy secret, she told the panel: “It wasn’t so much deliberate, I just wanted to enjoy it.

“Something like a baby comes and you just want to enjoy it before everybody [comments], it wasn’t a secret as such, but now he’s here and loud, so everyone knows.”

Tameka added: “Nothing prepares you for it, at one stage I’m with my daughter, who’s six, and I’m doing homeschooling, then you’ve got a newborn, who you’ve just got to watch doing everything but I’ve come through it.”

Where is Kim in EastEnders?

Kim is currently living her best life in Scotland.

She decided to make the move after being being given an incredible job offer that she couldn’t turn down.

Although she was sad to leave her family behind, she was desperate for a fresh start after the disappearance of her husband Vincent Hubbard (Richard Blackwood).

The fact she and Denise weren’t exactly on the best of terms made the decision slightly easier.

Kim did make a fleeting appearance via webcam to talk to her family at Christmas dinner.

But she’ll be back for good later this year.

How many children does Kim Fox have?

Kim has two children, a daughter called Pearl and a son called Mica.

Missing Vincent is their father.

She welcomed baby Pearl during EastEnders Live Week in 2015.

The Walford favourite then gave birth to Mica on Christmas Eve, 2018.

He was born in the Minute Mart and delivered by Phil Mitchell after he accidentally locked them both in the storage cupboard.

What is EastEnders: Secrets from the Square about?

Stacey Dooley has been hosting EastEnders: Secrets from the Square in the absence of the soap.

Unfortunately, EastEnders is now off air after running out of episodes due to lockdown.

But luckily, Secrets from the Square has been keeping fans entertained in the meantime.

In tonight’s episode, Tameka and Diane will enjoy a socially distance reunion for the first time since the former left in 2019.

Revealing what’s in store, Diane said: “I think what fans will get from it is that there are many shades to Denise and Kim.

“For people who have joined the show late, they’ll learn a little bit about why she is the way she is.

“And for people who have been with it over time, they’ll be reminded of things they liked or didn’t really like about the characters, because both are equally important.

“We’re in a soap and you’re not supposed to love the characters all the time.

“That’s a huge fallacy that somebody is just loved. In shows that I love, you hate and love characters in equal measure.”

She added: “I hope people think Denise has been a great part of the show.

“I think they’ll learn a little bit about my relationship with Tameka, as characters and as friends.

“Sometimes it’s nice to get a little peek through the window because I think that we have a very special partnership.

“We understand each other, have a great respect for each other’s work, and respect for our differences, and I think people enjoy getting a little glimpse into what we are like.”