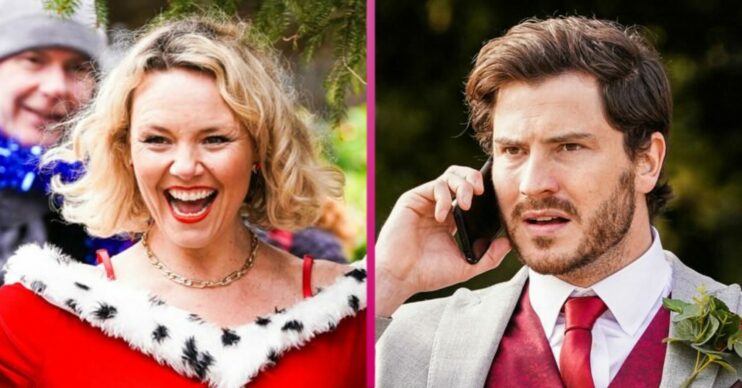 When is EastEnders on during Christmas Day? There’s a HUGE reunion in Albert Square

Here's everything you want to know about EastEnders' Christmas episode

EastEnders’ Christmas Day episode is all about weddings this year.

The BBC soap is hosting a double wedding extravaganza – and the outing of a serial killer.

Here’s everything we know about yuletide in Walford.

What time is EastEnders on on Christmas Day?

The BBC One soap will air a 45 minute episode on Christmas Day.

A special double length edition, it will be broadcast later than EastEnders’ ITV rivals.

What happens on EastEnders on Christmas Day?

It’s set to be another dark episode in Albert Square this year.

With Whitney Dean ready and determined to go through with her plan of exposing Gray, things will kick off.

It’s all smiles as Chelsea and Denise prepare for their special joint wedding but when Whitney shows up at Gray’s determined to put a stop to it – it’s clear she’s ready for battle.

Whitney finally knows what she has to do and tells Chelsea that Gray killed Chantelle.

Meanwhile, Gray and Denise wait for their respective partners at the altar but they’re nowhere in sight.

Chelsea is stunned by the revelation but will she believe Whitney? Or will she go through with the wedding?

Elsewhere Sharon and Phil’s inevitable reunion marches on when he invites her to the Slaters for Christmas lunch – without telling the Slaters.

The family are baffled why she’s there and it’s going to be very awkward.

Meanwhile, Janine is dressed up as Mrs Claus, enlisting Ollie’s help, she is hellbent on making it a perfect day for Scarlett.

Back at the Slaters, Kat is getting progressively more annoyed as Sharon and Phil reminisce but they soon realise the kids are missing.

Stacey looks out the window and is shocked by what she sees.

At the Vic, Janine makes a play for Mick Carter and kisses him under the mistletoe.

And over at Sonia’s, there’s nastiness afoot as Sandy arrives to blackmail Rocky with the secret of who he really is.

He’s on edge as Sandy teases him – as he should be with his heart.

It isn’t known if Sandy exposes Rocky yet – but she does drop a bombshell on her daughter Dotty.