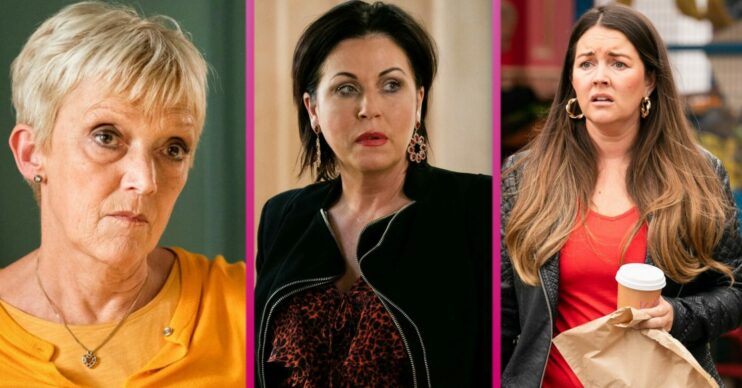 Stacey and Jean's fued is getting out of hand

EastEnders spoilers for tonight reveal Kat has had enough of Stacey and Jean’s arguing and so she makes a plan to leave.

Kat will issue her housemates with an ultimatum, but will it work?

Elsewhere, Liam finds himself at Janine’s mercy, but when it means betraying his sister, can he really go through with it?

And, Isaac tries to get Kim to see sense over private schools.

All this and more in EastEnders spoilers for Thursday, November 11.

With Jean and Stacey at loggerheads over missing Eve, Kat is fed up.

Determined to either stop their bickering or get away from it Kat issues them with a threat: if they don’t stop fighting she’ll move in with Phil.

Will it be enough to get Stacey and Jean to stop feuding and work together to find Eve? And what will Phil have to say about his new housemate?

Liam is helping Tiffany with a hen party booking, but when he comes across some car keys in a drunk girl’s coat he has an idea.

He quickly agrees to be the group’s naked butler, but what is he really plotting?

Later in the day, he brings Janine in on his plan and she likes his thinking. Wanting to make his idea more permanent, she suggests they steal cars from Tiff’s party guests.

Liam isn’t keen on the idea of betraying his sister, but knows it’ll make him the money he needs fast. Can he live with himself if he agrees to Janine’s plot?

Kim is determined Pearl must go to private school. Teacher Isaac wants to get her to see private schools aren’t the only way to make sure Pearl gets the best education possible.

However Kim won’t budge and vows to raise the funds somehow.

She soon decides to set up an online donation site for her followers to contribute to. Will Kim make the money she needs?

Also, the fallout from the baby daddy reveal continues, but will Sharon agree to raise her granddaughter?