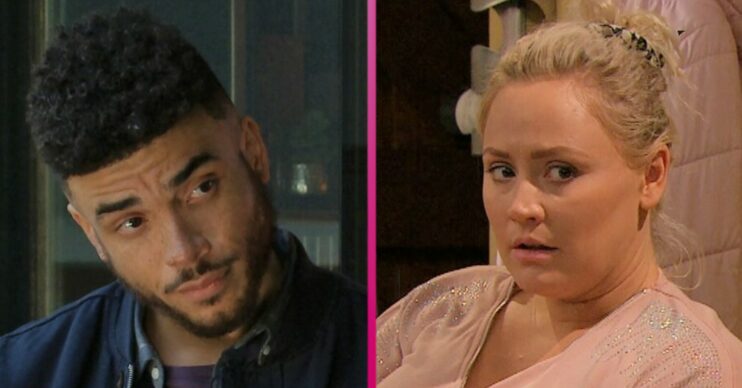 What’s happening in Emmerdale tonight? Nate betrays Tracy, but is there more to it?

He's chatting up a mystery woman, but will he cheat?

But is all as it seems or could there be more to it? Surely he wouldn’t cheat… would he?

Elsewhere on Thursday, November 11, Bernice thinks she might finally have got through to Gabby, and Ben is shocked by Jai’s latest move.

All this and more in tonight’s Emmerdale spoilers.

Does Nate cheat on Tracy in Emmerdale?

Oblivious to the fact Tracy has organised a date night for them at home, Nate is on the lash in Hotten with Billy.

A lady called Fiona begins chatting Nate up and he doesn’t seem to be pushing her away.

Meanwhile, wanting to lure her man home, Tracy sends him a sexy picture to show him what he’s missing.

Unfortunately, Nate has broken his phone, so doesn’t get the message. He’s also too preoccupied chatting to Fiona and when Tracy fails to get hold of him, she starts to panic.

When she questions Billy the next day, he’s forced to lie to her about what happened last night.

But what actually did happen? Did Nate really cheat on her – or is there more to it?

Has Gabby turned a corner?

Less than a month after giving birth, Gabby is bored with motherhood. She wants to be out partying with her mates not at home wiping up baby sick.

But Bernice knows she needs to pull her finger out, especially after what happened with Tracy the other night.

So it makes Bernice happy to see Gabby is ready to take control and care for Thomas herself.

But has she really turned a corner? Or is Bernice mistaken in her belief her daughter has changed?

Following the punch from Aaron, Jai suspends Ben from work.

Ben is fuming, but what does this mean for his future with Aaron? Will he forgive him?

Elsewhere, Al tries to explain things to Chas, and Liv hopes she can get through to Aaron.