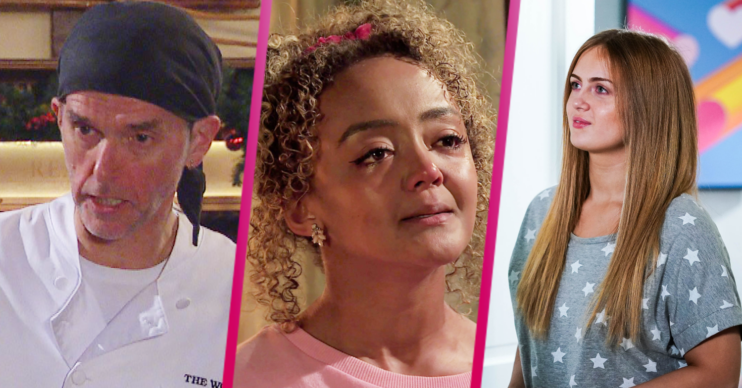 What soaps are on tonight and what time? BBC and ITV have HUGE schedule shake up

There's a schedule change on both ITV and BBC tonight

BBC and ITV have changed their schedule tonight (Tuesday, December 14) but what soaps are on tonight and what time are they airing?

What soaps are on tonight and what time?

Soap fans will be happy to hear there is an episode of Emmerdale, Coronation Street and double EastEnders on tonight.

Emmerdale will be on at the usual time of 7pm for half an hour.

This will be followed by a half hour episode of Corrie at 7.30pm.

Over on BBC, Holby City will start at the earlier time of 7.30pm. EastEnders will follow at 8.15pm for a 45 minute episode, ending at 9pm.

The reason for the double episode of EastEnders is because there will be no episode on Friday December 17.

In tonight’s episode of Emmerdale, Chas and Marlon are furious when they suspect Al changed their promotion at the Woolpack.

Cain is seething to hear of Al’s latest antics and PC Swirling warns him away from Al.

Al is unfazed by Cain’s murderous threats, confident he’s got the Dingles beaten.

Meanwhile in Coronation Street Curtis returns home and makes out he’s exhausted after his run.

Emma confronts him with the pill box and demands answers.

Summer feels frumpy after looking at pictures of Daisy online and later feel guilty after eating a burger at the Bistro.

Oblivious to her fragile state, Billy assures her she’ll smash her Oxford interview.

In EastEnders Aaron gets Tiff a drink and when he’s away from his phone it rings. Tiff goes to answer but Aaron snaps at her for invading his privacy and grabs her arm.

Liam enters and spots the exchange and Tiffany warns Aaron not to speak to her again.

Fed up Tiffany suggests she join Liam in Germany.

Which soaps will you be watching tonight? Leave us a comment on our Facebook page @EntertainmentDailyFix and let us know what you think.