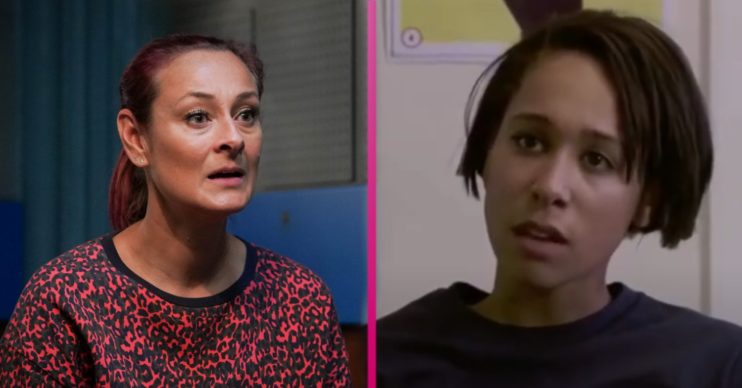 What happened to Tosh from EastEnders? Tina’s abusive ex-girlfriend

Fiona ‘Tosh’ Mackintosh in EastEnders appeared from February until December 2014 and was Tina Carter’s girlfriend.

Back in September, abusive Gray killed his wife Chantelle. But despite Chantelle’s death being ruled an accident viewers know Gray killed her and Kheerat is suspicious of the solicitor.

Recently Tina moved into Gray’s basement room. However when Kheerat found out about her new living arrangements, he warned Tina about Gray.

But in last night’s episode (Thursday, December 17) Tina went to see Kheerat and asked what he meant when he said Gray  ‘isn’t the good guy everybody thinks he is’.

When Kheerat asked what happened, Tina told him that Gray reminded her of her ex-girlfriend Tosh, who was abusive towards her.

Tina explained Tosh was a “smooth operator like Gray” and had Tina wrapped around her little finger.

Kheerat explained that he thinks Gray is capable of much more than what people think.

Could Tina be spotting the signs that Gray was abusive to Chantelle?

But what ever happened to Tina’s ex-girlfriend Tosh?

What happened to Tosh from EastEnders?

In 2014, Tina reunited with her former flame Tosh. However it wasn’t long before Tosh started being violent towards her girlfriend.

Tosh overheard Sonia tell Bianca about her kiss with Tina. Later, she packed Tina’s bag and tried to throw her out, but when Tina went to take her back into their room, Tosh shoved Tina, causing her to hit her head against the doorframe.

The couple soon reconciled and tried to start a family. Tosh fell pregnant through IVF, however she ended up having a miscarriage.

Later a drunk Dean told Tosh he would be their donor and they agreed on the condition not to tell Tina. But when Tina found out she was furious.

When Tosh called Tina a bad mum, Tina slapped her and Tosh proceeded to punch Tina.

Tosh soon became paranoid Tina was having an affair with Sonia. And when Tosh found Sonia’s watch in their flat, she viciously beat Tina.

She later tried to apologise to Tina but Tina rejected her, telling her to take a new job.