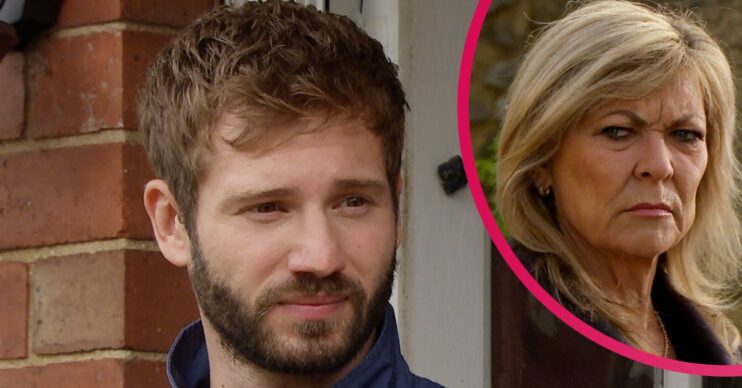 What happened to Jamie Tate in Emmerdale and will he ever return?

Jamie Tate in Emmerdale was the apple of mum Kim‘s eye, until he tried to kill her and then faked his own death.

He’s a chip off the old Tate block all right!

But what happened to Jamie Tate in Emmerdale?

Read more: Who is in the full Emmerdale cast for 2022? Meet them all here!

Who is Jamie Tate’s dad in Emmerdale?

Jamie Tate in Emmerdale is the son of manipulative soap queen Kim Tate and her husband Frank.

When he was born, there was doubt over who his dad was, because Kim had an affair with Dave Glover.

Kim really loved Dave and after his tragic death she struggled to bond with her baby. And when Frank had a DNA test and discovered he was Jamie’s real dad, she became even more distant.

Jamie’s parents’ marriage was totally toxic and when Kim wanted out, she faked her own death and fled to Mauritius. She left little Jamie with her dad, and framed Frank for murder. Typical Kim!

But when Frank was released she had a change of heart, and offered to clear his name in exchange for custody of her son.

There was a violent confrontation but Frank collapsed and died, and Kim took Jamie back. She eventually left Emmerdale for good with Jamie.

When did Jamie return to the village?

In April 2019, Jamie arrived in Emmerdale with a literal bang, when Megan Macey crashed her car into his, causing him to mow down Eric Pollard.

It soon became clear that Jamie was estranged from his manipulative mum and they had lost touch.

When Jamie’s wife Andrea and their daughter Millie arrived in the village, things became more hostile between Jamie and his mum. Andrea confessed that Graham had paid her to look out for Jamie while Kim was in prison.

Jamie and Andrea’s relationship fell apart after she admitted sleeping with Graham which meant Jamie was a suspect in Graham’s murder. But he was cleared when he revealed he’d been with Belle Dingle when Graham was killed.

Jamie and Belle were an item for a while, and it seemed like the real deal. But Jamie had knocked over Moira Dingle and left her for dead. He and Kim covered up the accident.

When the Dingles found out the truth about who was to blame, it looked like Belle had sided with her boyfriend over her family.

But instead she tricked him into revealing where the evidence of his crime was and shopped him to the police.

But Jamie’s a Tate through and through and managed to make it look as though Belle was to blame.

Just as she was facing a prison sentence, her nephew Nate stepped in and took the rap.

But the stress of Jamie’s revenge took its toll on poor Belle, who stills bears a grudge against her ex (and who can blame her?!).

Gabby Thomas has his baby

After a one-night stand with Jamie, Gabby Thomas found out she was expecting his baby.

Jamie wasn’t impressed and wanted the troubled teenager to terminate her pregnancy.

After some (dubious!) advice from Mackenzie, Jamie realised Gabby would be more likely to do as he asked if he was nice to her. But Gabby’s no fool and she realised what he was up to.

But Jamie has yet to meet the tot, with everyone believing he’s dead…

Read more: Are the 365 cast having sex for real? Viewers are convinced!

What happened between Jamie Tate and Dawn Taylor?

Jamie fell for Dawn Taylor, but their romance hardly got off the ground before Gabby’s pregnancy scuppered it.

Then Kim stuck her oar in, threatening poor Dawn to stay away from Jamie – or else.

Evil Kim spiked Dawn’s drink so she wouldn’t be in a fit state to meet her son’s social worker.

Fortunately Kim’s plan failed but Dawn told Jamie what his mum had done, leaving the young vet furious when Kim gloated about it.

However, Dawn and Jamie eventually split when he tried to frame her dad, Will Taylor, for poisoning his mum. In fact, Jamie was behind the whole thing…

Fed up of his mum’s manipulating and meddling, Jamie began to poison Kim’s brandy decanter.

Kim worked out what was going on and decided to teach him a lesson – by faking her own death, again!

When Jamie discovered she wasn’t actually dead, he was fuming, but even more so when she disowned him – and worse disinherited him.

Jamie lost everything when Dawn also ended things over his deceit.

Determined to get his hands on Kim’s money somehow, Jamie agreed to elope with Gabby so the baby would get the money and therefore he’d also have access to it.

But Jamie got cold feet and instead asked Dawn to run away with him.

Dawn turned Jamie down, but he decided to leave anyway to escape both Gabby and his mother.

He drove his car recklessly out of town and accidentally drove off a cliff edge into a lake.

When the police dredged the water, they found the car, but no sign of Jamie’s body.

For weeks everyone, except Kim, believed he was dead. But Kim was sure her son was still alive and had faked his own death. Takes one to know one, eh?!

When Jamie’s ex-wife Andrea then died, Kim organised a memorial, convinced Jamie would show up. However when he didn’t she accepted he was dead and has tried to move on with her life.

But, lo and behold, Kim had been right all along: Jamie had faked his own death and was holed up with Andrea’s mum, Hazel.

Is Jamie Tate returning to Emmerdale?

When it was revealed Jamie was still alive, Emmerdale insisted there were “no plans” for him to comeback to the show.

However, in an online press event earlier this year, Entertainment Daily discovered Kim could learn the truth about Jamie this year.

Producer Laura Shaw said: “Up at Home Farm, we know that Jamie Tate is actually still alive, of course. So obviously that information is still to come out.

And this week, as the family plan Thomas’s christening, Gabby is edging ever closer to the truth.

She surprised Hazel and Millie at home in a bid to get Millie to the christening.

Hazel then phoned Jamie and told him what had happened. He agreed Millie had to go to the service, but that Hazel must make sure she keeps quiet over him being alive.

But with Gabby set to get a shock at the christening, will she find out the truth?

Is Jamie on his way back to the Dales?