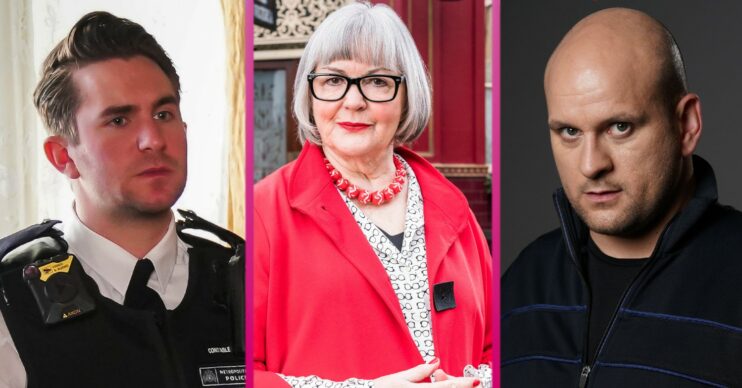 Who is Violet Highway in EastEnders and is she hiding a secret?

She's not being completely honest with grandsons Stuart and Callum

Violet Highway in EastEnders has only been in Walford for a month or so, but she has certainly made her mark on the Square.

From trying to set up her – married – grandson Stuart Highway with Honey Mitchell, insulting her other grandson Callum’s husband Ben, and getting right up grand-daughter-in-law Rainie’s nose, Vi’s been causing trouble all over the place.

Who plays Violet Highway in EastEnders?

Violet Highway is played by legendary actress Gwen Taylor. Gwen’s long and varied career has seen her appear in films including Monty Python’s The Life of Brian and a list of television shows as long as your arm!

Gwen made her name in the 1980s sitcom Duty Free. She was nominated for a TV Bafta for her role in A Bit of a Do, and starred as the title character in Barbara. She’s been in Midsomer Murders, Wycliffe, Inspector Morse, Doc Martin, Trollied and Heartbeat, plus many more.

In 2011, Gwen joined Coronation Street playing Anne Foster, the mother of Frank Foster, who raped Carla Connor. Anne was revealed to be Frank’s killer after a whodunnit storyline.

And now she’s brought her expertise to Albert Square.

Gwen is married to playwright Graham Reid and she is step-mum and step-grandmother to his three children and two grandchildren.

Vi is mum to Stuart and Callum’s dad, Jonno. He is a nasty piece of work. He came to Albert Square in July 2019 having been invited by Whitney.

He insulted both Ben and Callum, with his homophobic views. And when he returned to Albert Square a couple of months later, he wasn’t impressed to hear Callum had called off his wedding to Whitney.

When Callum came out to his dad, Jonno reacted badly. He accused Ben of turning Callum gay, and was rewarded for his nasty opinions with a punch from Phil Mitchell. Yay!

Vi’s been living with Jonno but it seems there’s more to her arrival than meets the eye. What’s she not been telling her grandsons? And does that mean she might be sticking around in Walford for longer than we thought?

Want more on EastEnders? Entertainment Daily has a dedicated EastEnders spoilers section for you to get your fix before the latest episodes air.

Would you like to see more of Violet in EastEnders? Leave us a comment on our Facebook page @EntertainmentDailyFix and let us know what you think.