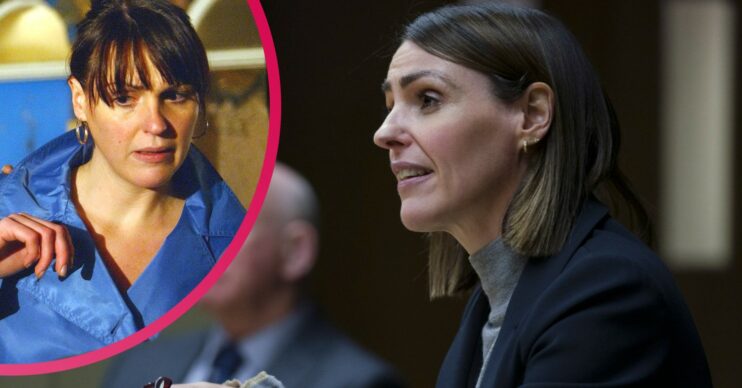 Vigil star Suranne Jones: Who did she play in Coronation Street?

Is there any chance she could return to the cobbles?

Vigil star Suranne Jones is an award-winning actress, who’s starred in some of the most popular TV shows of recent years from Doctor Foster to Gentleman Jack, Save Me, and Vigil.

She’s definitely a national treasure and her career seems to be going from strength to strength.

Suranne – whose real name is Sarah Anne – is also a devoted wife and mum, and a keen supporter of breast cancer charities after her mum was diagnosed with the disease when Suranne was just a teenager.

Who is Suranne married to?

Suranne is married to scriptwriter and former magazine editor Laurence Akers. The pair met at the wedding of Suranne’s friend and one-time Corrie co-star, Sally Lindsay when she tied the knot with her musician husband, Steve White.

Suranne and Laurence have a son together, who was born in 2016.

When was Suranne in Coronation Street?

Suranne’s first stint in Corrie was back in 1997, when she appeared in one episode as a character called Mandy Phillips. She had a one-night stand with womanising mechanic Chris Collins.

Three years later, Suranne returned to the cobbles as Karen Phillips. It could be that the two characters were related though no one has ever confirmed that to be the case.

Karen was soon in a romance with Steve McDonald. The pair got engaged after Karen had a bet with Janice Battersby, and went through with the wedding because neither of them wanted to back down!

But their relationship was real. Though they also had a fake break-up in order for Karen to have the wedding of her dreams.

Karen and Tracy Barlow – who’d had Steve’s baby, Amy – had a long-running feud that included a brawl at Amy’s christening, and a dramatic rooftop confrontation.

Suranne scooped Best Actress at the British Soap Awards in 2004, shortly before she announced she was leaving the Street.

What has Suranne been in?

After she left Corrie, Suranne appeared in Unforgiven, and the Doctor Who spin-off the Sarah Jane Adventures.

Scott & Bailey ran for five series. After it finished, Suranne went on to other roles, including haunted house thriller The Secrets of Crickley Hall, the tense family drama Doctor Foster with Killing Eve star Jodie Comer, and Save Me.

What’s next for Suranne?

She also recently announced that she will soon be playing Becca in a new show called Maryland, which she’s also going to be executive producing.

Is there anything she can’t do?