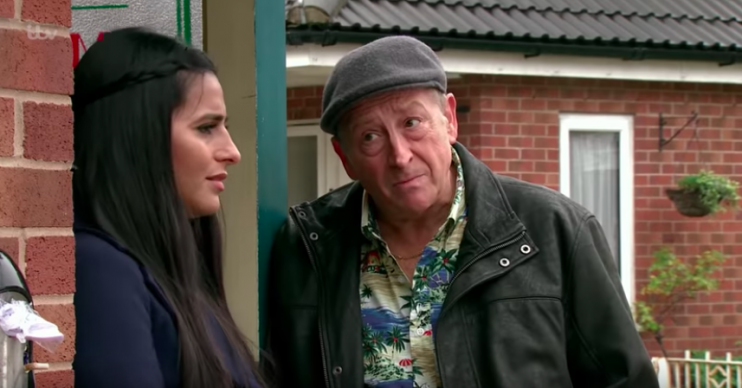 For months, Geoff has been abusing his wife Yasmeen as part of a coercive control storyline.

His most recent abuse campaign has included convincing Yasmeen’s friends she’s an alcoholic, tracking where she is at all times and not allowing her access to her own money.

In the last few months, not only did they get married but Geoff became a co-owner of the business Speed Daal, which upset Alya.

In last night’s episodes (Wednesday February 26 2020) Alya, who is also a co-owner of Speed Daal, wanted to come back to work at the restaurant after discovering Ray, who she was working for previously, had been planning to get her into bed.

Although Geoff told Yasmeen he was happy with Alya returning to work at Speed Daal, he tried his best to make her first day back difficult.

Geoff told a couple who were eating at the restaurant because the service was slow and they didn’t have the Paneer they wanted that their meal was on the house.

He then told Yasmeen and Alya he had to not charge the couple because they complained about the service.

Later Tracy Barlow had to return to the restaurant as her take out was missing a bag of pilau rice.

Alya asked Geoff to double check the orders but he blamed messing up the order on Alya’s handwriting.

He then showed Alya a nasty review about her online claiming it was from customers who came in earlier.

But viewers are convinced Geoff wrote the review himself and are angry he’s targeting Alya.

Geoff wrote that review the manipulative old fart. Can’t wait for him to get his comeuppance #Corrie 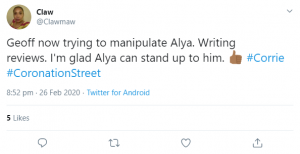 What's the bets that Geoff wrote that review himself? #corrie

geoff is the one who left the review omg #corrie

Despite Geoff’s attempts to belittle Alya, she stood up to him saying she didn’t like him but wanted to keep things professional for her gran.

Next week Alya confronts Geoff after finding out Yasmeen had been crying in the garden but he’s evasive.

However this raises Alya’s suspicions even more and she asks Yasmeen what’s going on. Will Yasmeen tell her the truth?

When Yasmeen gets home from her walk with Alya, Geoff lies that he was worried she would leave him, leaving Yasmeen baffled.

With Alya closing in, will Geoff be able to cover his tracks?