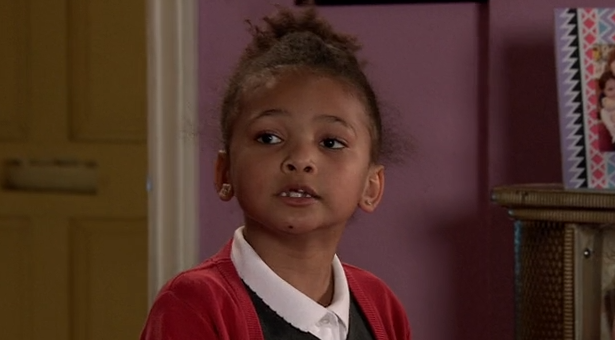 Viewers of Coronation Street have been left fearful for Ruby Dobbs as she appears to be ‘left out.’

In last night’s episodes (Wednesday February 12 2020) Hope was excited to go to the cinema with her stepdad Tyrone and half-sister Jade.

Although Tyrone’s daughter Ruby was invited to go with them, she didn’t want to.

After Hope and Tyrone left, Evelyn came home and asked where Ruby was.

When Fiz told her she was in the living room watching TV, Evelyn said: “Well it’s lucky one of us has plans for her. How is she gonna feel when they start comparing notes, eh?”

Evelyn and Ruby set up their own shop in the living room but when Hope and Tyrone returned home, Hope called their game boring, causing Ruby to go upstairs upset.

Later Ruby had a sore tooth and Tyrone wanted to text Jade to find out where the Calpol was, but Fiz wouldn’t let him and told him to go to Dev’s shop to get more.

Viewers are starting to worry that with all the attention Hope has been getting, Ruby is being left out.

Ruby's such a neglected child, feel sorry for her #Corrie

Hope storyline is doing my head in, hope seems to get away with everything and it always her, what about Ruby?! Evelyn is right she seems like she’s neglect, no one bother about her!#corrie

I feei for Ruby being left out due to Hope…….and fizz cant stand fizz or Tyrone to be honest #Corrie @itvcorrie

Ruby deserves her own little storyline….too much focus on Hope #Corrie

I am glad #Ruby has #Evelyn #Corrie

Hope has had a lot of her parents’ attention over the last year.

At the end of 2018, Fiz took Hope to a school in Birmingham which specialises in children with behavioural issues.

When she returned, it became clear Hope’s behaviour hasn’t improved much and Fiz called tutor Jade to come and live with them and home school Hope until she got a place in public school.

However, Jade proved to be trouble and it was revealed she’s John Stape’s daughter, meaning she is Hope’s half-sister.

I feel for Ruby being left out due to Hope.

Jade caused a load of trouble, falsely accusing Fiz of abusing Hope and planning to run away with the little girl.

However Fiz and Tyrone have allowed Jade to see Hope with supervision.

But will she try and run off with Hope again?

Do you feel back for Ruby? Leave us a comment on our Facebook page @EntertainmentDailyFix and let us know what you think!