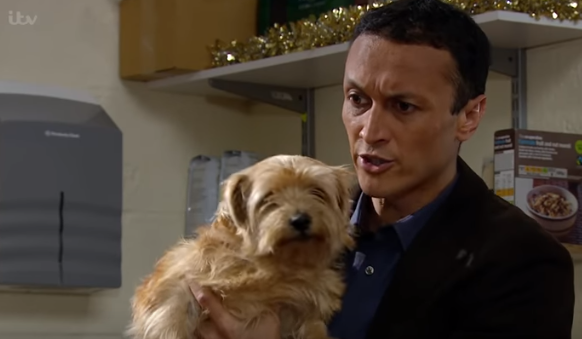 Emmerdale viewers devastated as Tip the dog is killed

Andrea accidentally ran her over

Viewers of Emmerdale have been left devastated after it was revealed Tip the dog had been killed.

Tip has been missing since he escaped in last week’s episodes, which detailed the events leading up to Graham Foster’s death.

In the episode which centred around Jai (Tuesday January 21 2020), Tip ran away from the Sharmas’ house.

Priya has spent the last week looking for Tip and in last night’s episodes (Thursday January 30 2020) viewers found out what happened to the pooch.

Andrea broke down to her estranged husband Jamie claiming she killed Tip.

Clearly upset, she said: “I’m the one who hit her.”

Confused, Jamie asked who and Andrea  replied: “Jai’s dog Tip. It was an accident. I knocked her over and I panicked, I didn’t know what to do.”

Andrea felt terrible for not saying anything to the Sharmas and she burst into tears as she revealed she buried the dog in the woods.

She also revealed she had been drinking and feared getting into trouble.

Viewers were devastated to learn Tip had died.

Poor Tip 😢😢😢😢😢😢😢 She will be running free with Frank now #emmerdale

I just got emotional thinking about Frank and Tip being reunited in heaven. 🧑🏻‍🦳🐶😭 #emmerdale

We later saw her running through the woods and with her arms covered in blood.

Meanwhile Andrea has no idea that Jamie was with Belle the night Graham was killed.

After Andrea told the police she was with Jamie that night, he told Belle about Andrea giving him a false alibi.

It was revealed to viewers that the vet had slept with his co-worker Belle.

Will Andrea ever find out the truth about Jamie’s whereabouts that night?