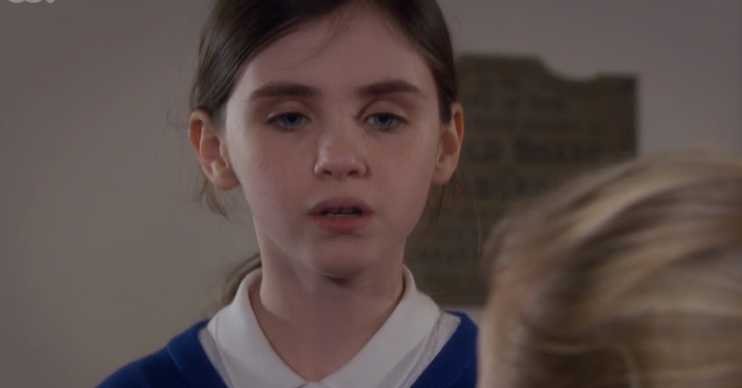 April has been bullied after Marlon was falsely charged with murder

Viewers of Emmerdale cheered on April Windsor last night as she stood up to the classmate who had been bullying her.

This week, viewers started to see that April had been receiving nasty messages from an unknown number calling her dad Marlon a murderer.

At the church, April’s classmate Tamsin passed her a note which said: “God hates murderers. Pass it on.”

The note caught the attention of April’s family member Vinny.

Seeing Marlon helping out only fueled Tamsin’s need to be cruel to April.

Later Vinny went to talk to April and she revealed that the bullying started when Marlon first went to prison.

She hoped when the police let Marlon go that it would stop, but it didn’t.

April told her ‘cousin’ the extent of the bullying and that Tamsin made the other kids blank her, so she had to spend lunchtimes alone.

Vinny gave April some advice saying that her bully wouldn’t stop until someone stood up to her.

Back at the church, Harriet asked the children to make up their own commandments and Tamsin began mocking April saying: “Thou shall not kill. Tell your dad, I dare you. He’s a murderer.”

Tamsin then began accusing April of being a murderer, however April had had enough and decided to stand up to Tamsin.

She stood up in front of everyone and said: “Thou shall not bully by spreading lies, sending horrible messages, making all the others be mean too or you won’t be their friend either.

“How would you feel if it was your dad that I was saying horrible things about? If the police say he’s innocent, then he is. So shut your stupid mouth Tamsin.”

Viewers were thrilled that April stood up to her bully and cheered her on.

Afterwards, Marlon took April home and told Rhona what had been going on.

April confessed she didn’t tell anyone as Marlon had only just come out of prison and didn’t want to upset him.

That was fantastic! Yes April!

Marlon gave his daughter some advice saying real friends are loyal and the only comments they should care about are from the people they love.

Is the bullying over, or will Tamsin carry on being cruel?