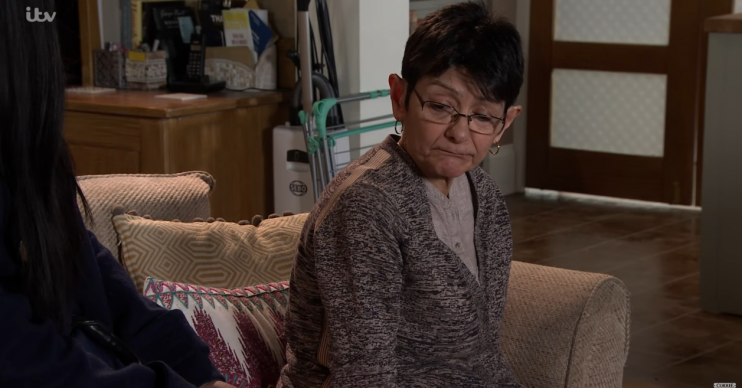 For months, Geoff has been abusing his wife as part of a coercive control storyline.

Gail told Alya about Yasmeen’s clear distress and in last night’s episode (Monday March 2 2020) Alya snuck away from work to see her gran.

Although Yasmeen told her granddaughter that Charlotte had died, she didn’t tell her how.

Viewers are begging Yasmeen to tell Alya the truth about Geoff’s abuse and have been left frustrated that she covered up his crime.

I don’t understand why Yasmeen doesn’t speak up. Perhaps it’s just me I’d prefer to name & shame someone who was treating me like that so everyone knew what they were really like instead of staying quiet. I don’t know if some are scared of standing up for themselves. #corrie

When Geoff returned home to find Yasmeen had gone out with Alya, he was frantic that she’d left him.

Yasmeen returned and he turned on the crocdile tears, begging her not to leave him.

She later told her husband she understood that him killing Charlotte Bronte was a mistake.

Geoff’s abuse has been building for months and has included selling Yasmeen’s precious belongings, using cameras to spy on her and leading her to believe he’s ill.

Since they got married, Geoff’s abuse has only got worse.

Not only has he got Yasmeen constantly cleaning and cooking for him, he led her to believe she has a problem with alcohol and has taken control of her money in order to ‘help’ her.

Last week, Geoff was furious that Yasmeen had cooked a dinner with no meat, but she told him she couldn’t afford to buy any with the money he had given her for shopping.

After throwing the food away, Geoff decided to kill and cook Yasmeen’s favourite chicken Charlotte Bronte.

Although Alya doesn’t know about Geoff’s cruel treatment towards Yasmeen, she has her suspicions.

Alya clearly doesn’t like her grandmother’s husband and was unhappy when he became part of the family business, Speed Daal.

Last week, he began to target Alya as she came back to work at the restaurant.

But will she figure out the true extent of Geoff’s behaviour?

Do you think Yasmeen will eventually tell Alya the truth? Leave us a comment on our Facebook page @EntertainmentDailyFix and let us know what you think!