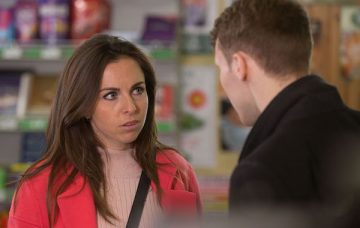 There's been a huge twist in her rape plot

Ruby Allen tracked down and confronted the man who accused her of sexual assault in Tuesday’s episode of EastEnders.

In a twist that left viewers praising the BBC One soap for its deft treatment of a sensitive topic, it was revealed her accuser was a former employee she pressured into sex.

Events manager Allen (Louisa Lytton) – herself a victim of rape – subsequently fired the man, Blake Turner, after he ended their relationship.

Ruby is in the process of taking Ross Swinden (Ossian Luke) and Matt Clarkson (Mitchell Hunt) to court after they raped her.

But in a shock twist it was recently revealed she was also being accused of sexual assault.

An episode last week saw her arrested on that charge and on Tuesday, after being released, she tracked down her accuser, thinking he had been put up to it by Swinden.

However, it transpired Turner had nothing to do with Swinden and he claimed Ruby had used her position as his boss to force herself on him.

After she confronted Turner in a park, he told her: “We both know I am not lying. It’s taken me a long time to process it, to see it as what it was.

“You were my boss. Don’t you remember the office Christmas party. The way you came on to me. You kept rubbing up against me, telling me I was your Christmas bonus.

“I wasn’t laughing. You kept touching me and grabbing my bum. I thought if I didn’t have sex with you then I’d get fired.

“I was right, wasn’t I? Because when it ended you fired me.”

All the while Shirley Carter was seen hiding, listening to their conversation.

After telling Turner she was sure he had been put up to it by her rapists, he replied: “You have to know, someone did put me up to it – my girlfriend.

“She was the one who made me see it for what it was, sexual assault. She’s right, I have to face up to what happened and you’ve got to be made to realise that you can’t get away with it.”

Some hailed the storyline for flipping convention on its head.

Others claimed it was unrepresentative of real life.

Some fans of the show aired their suspicion that a plot twist was coming up.

The scene ended with Ruby becoming distraught at the realisation of what she had done.

Following Turner to the station sobbing, she told him: “I’m so sorry, I had no idea. I’ll leave you alone, you do what you feel is right.”

EastEnders continues on BBC One.