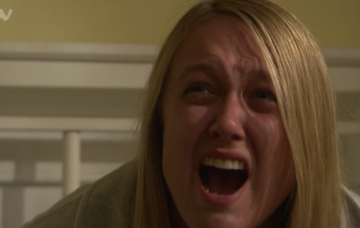 Is this the grisly end for the terrified mum?

Emmerdale has lined up a terrifying new twist in the ongoing Rebecca White saga for tonight, making it an episode not to be missed.

After being held hostage by Lachlan for weeks, Rebecca’s disappearance from the village sparked panic amongst her friends when they thought the mum had met an untimely end.

However last week saw her nephew finally confess that Rebecca was actually alive, and viewers were let into the secret that she was being ‘looked after’ by a nurse, who was working for Lachlan.

But despite the fact Rebecca has been pleading with the nurse that her nephew is a killer, the nurse didn’t believe a word she was saying, having been manipulated by twisted Lachlan.

But tonight sees a shift in the nurse’s behaviour when she starts to question a distrustful Rebecca about Lachlan’s crimes once again.

Rebecca goes over what she’s been trying to tell the woman for weeks, but this time the mysterious nurse finally listens to what her ‘patient’ has to say.

It finally transpires that the nurse has seen Lachlan on the news, and she’s realised that she’s been working for a killer.

As last – the penny has dropped!

But just when it looks like Rebecca might get freedom at last, there is a huge twist tonight when the nurse panics that she will be implicated in Lachlan’s crimes after working for him and takes drastic action.

Desperate not to be discovered as an accomplice to a killer, the nurse will suddenly launch herself at Rebecca with a syringe in tonight’s visit to the Dales, leaving viewers wondering what her fate will be.

Is the nurse helping Rebecca in some way? Or is she more concerned about covering her tracks and getting rid of Rebecca?

After all these weeks of surviving evil Lachlan’s terrifying games, is Rebecca about to meet a grisly end thanks to her nurse?

As Rebecca finds her fate in the hands of the nurse, Robert continues his mission to track her down. Could he find her before it’s too late?

Do you think this is the end for Rebecca? Leave us a comment on our Facebook page @EntertainmentDailyFix and let us know what you think!