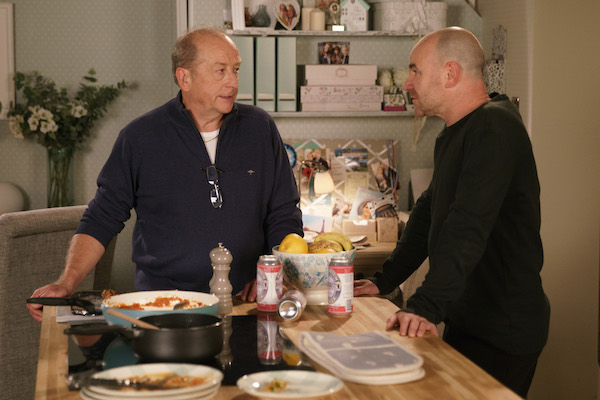 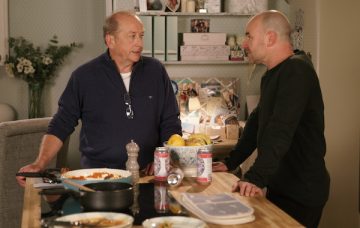 Why hasn't he noticed?

Viewers of Coronation Street have slammed Tim Metcalfe for not noticing his dad Geoff is abusing his wife Yasmeen.

Fans of the ITV soap, increasingly distressed by the ongoing storyline of coercive control, have called Tim “stupid” for not seeing the signs of gaslighting.

This week, Geoff’s behaviour towards wife Yasmeen became even more dark and disturbed when he locked her in a box.

Tim is the most stupid character ever. He’s living with Yasmeen and Geoff, how can he not see how he’s treating her?

The unhinged former hospital DJ blew a fuse when he felt humiliated in public as his turn as a magician went wrong.

Of course, this is vile bully Geoff we’re talking about, so he took it out on his poor wife.

He then told Yasmeen she could make amends with him if she practised the magic trick again for future performances.

She dutifully got into the box, still desperate to please the man she loves, but began to panic as Geoff showed no signs of letting her out…

Ignoring her pleas, he locked the box and went to the pub!

Freeing her, it seemed like Geoff’s abuse might finally be exposed – but the lying toe-rag was able to talk his way out of it YET AGAIN.

And those watching from home were left shouting at their TV screens, begging Tim to see through his dad’s lies.

Trouble is Corrie is making Tim more and more stupid by the minute..not funny or that realistic..shame????

Tim is the most stupid character ever. His living with Yasmeen and Geoff,chow can he not see how his treating her #Corrie

#CrocodileTears from Geoff! WHY DOESN'T TIM NOTICE HIS DAD'S BEHAVIOUR? Was he treated the same??? #Corrie #YasmeenandGeoff

Yes he is dim. I credit that beenie hat he wears with more sense

Come on Tim don't leave it there !!! Look into it more #Corrie

Why the hell did Tim not question why Geoff left Yasmeen on her own when she was in the box!!! FFS 🤬 This storyline is horrendous and very difficult to watch but so bloody important #PleaseEndItSoon #Corrie

One said: “Corrie is making Tim more and more stupid by the minute. Not funny or realistic.”

Another agreed, saying: “Tim is the most stupid character ever. He’s living with Yasmeen and Geoff, how can he not see how he’s treating her? #Corrie.”

A third blasted: “Crocodile tears from Geoff! Why doesn’t Tim notice his dad’s behaviour? Was he treated the same? #Corrie #YasmeenandGeoff.”

“Is Tim really this dumb?! Can’t he see that Yasmeen was locked in the box by his dad in purpose?” seethed another, while one more said: “How has Tim not noticed his dad’s a raving psycho [bleep]?”

One more fumed: “Why the hell did Tim not question why Geoff left Yasmeen on her own when she was in the box? This storyline is horrendous and very difficult to watch but so bloody important #PleaseEndItSoon #Corrie.”

Reports this week suggest that Yasmeen’s granddaughter Alya Nazir will be the one to discover Geoff’s history of abuse.

A source told The Sun Online that Bistro manager Alya is going to beg her grandmother to leave her husband Geoff after discovering his abuse.

Alya will soon begin to look into Geoff’s background in an effort to convince her grandmother to leave him.

A source said: “Alya will become determined to save her grandmother from him no matter what the cost.”

“Alya digs into his past and finds an old news report about an assault he committed on another woman and confronts her grandmother with it.

“She desperately tries to make her see sense but it looks like Geoff’s got too strong of a hold on Yasmeen by that point.”

Meanwhile, fans of the soap have criticised the disturbing scenes of abuse for being unsuitable for its pre-watershed time slot.

Who do you think will ‘save’ Yasmeen? Leave us a comment on our Facebook page @EntertainmentDailyFix and let us know what you think!