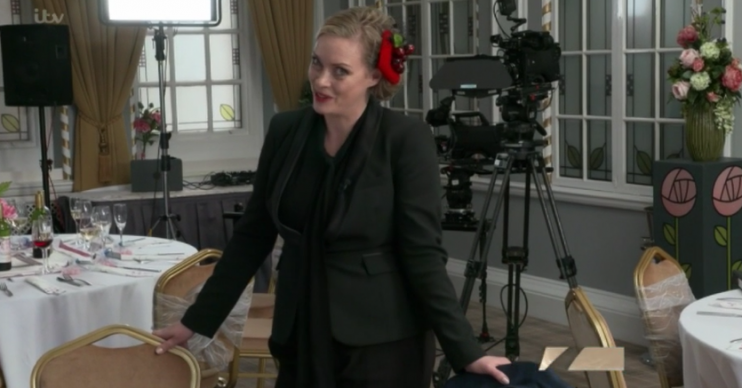 She called Beth Sinead's mum instead of aunt

Soap expert on This Morning, Sharon Marshall, has earned the wrath of Coronation Street fans after making a mistake during a behind-the-scenes interview.

Sharon was bringing viewers backstage gossip from the wedding of Sarah Platt and Adam Barlow, which takes place on screen tonight, when she made the blunder.

Read more: Coronation Street scripts stolen after Maureen Lipman leaves them in the back of a cab

Referring to Lisa George’s alter ego, Beth Tinker, as the late Sinead Osbourne’s mother, fans were quick to point out Sharon had got the family connection very wrong.

In fact, although Beth was like a mother to Sinead, Beth was actually her aunt.

I thought Sharon knew her soaps, Beth is not her mother.

Sharon was interviewing Lisa over her part in tonight’s wedding celebrations.

Beth is not happy over Daniel Osbourne’s new relationship with Bethany Platt, and the fact they are planning to run away to London together.

The wedding brings up some raw emotions for everybody as it soon becomes clear Daniel is not really over his late wife.

Sharon said to Lisa: “She [Beth] must be heartbroken as a mother though because it’s like her daughter just… did she mean nothing to him? What’s going through her head during all of this?”

Lisa replied: “She’s just really broken. She’s grieving about Sinead and she’s so shocked that he’s moved on so quickly. She can’t believe it.”

It’s her NIECE not her daughter 😆 #thismorning

So-called soap expert and she didn’t even know that.

I thought Sharon knew her soaps, Beth is not her mother. #ThisMorning

Sinead died in October last year after a battle with cancer.

Although Sinead gave Daniel her blessing to move on with Bethany, Beth won’t accept them together.

Desperate to prove he is ready to be with someone else, Daniel proposes to Bethany this week – with Sinead’s wedding ring!

Bethany faces a huge dilemma, but will eventually leaves the cobbles on Wednesday March 4, but will Daniel be going with her?