Over the years soaps have had some amazing storylines, ones that broke viewers' hearts and others that stuck with viewers for the rest of their lives.

However, there are also some storylines that don't quite add up, feel repetitive, or are just plain stupid and unrealisitc.

Here are the worst current storylines across Coronation Street, EastEnders, Emmerdale and Hollyoaks. 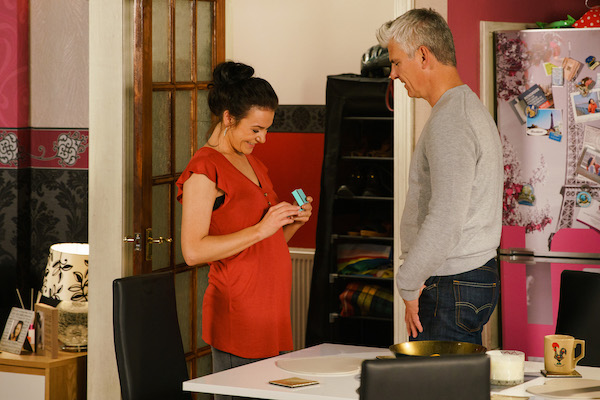 Robert is engaged to Michelle and a pregnant Vicky (Credit: ITV)

Currently on Coronation Street, Robert Preston is engaged to both Michelle Connor and Vicky Jefferies.

After Michelle and Robert split up, due to him wanting kids and her not wanting any more, he started seeing Vicky.

Robert then split up with Vicky when Michelle asked him to try again, but just as he was about to propose to Michelle, Tyler told Robert that Vicky was pregnant.

Instead of telling Michelle the truth, Robert decided to lie to both women. What could go wrong? Well, everything...

When Robert took Michelle's ring to be resized, he dropped it at Vicky's when they argued over her leaving to live in Ireland.

Seeing the ring, she assumed he was going to propose. Of course Robert ended up proposing in order to get Vicky to stay close by.

Somehow neither woman has figured out Robert is leading a double life, which frankly makes them very stupid or Robert very clever. I don't think it's the latter... 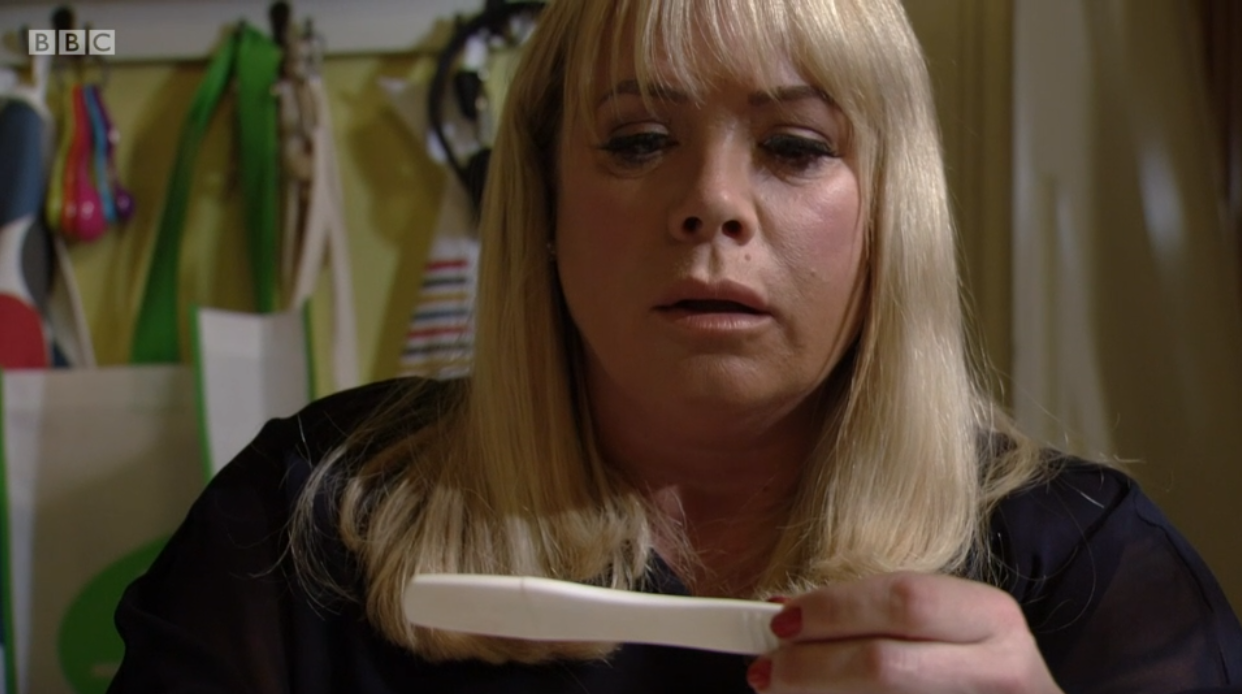 Despite being infertile and the fact her now teen son Dennis was a miracle baby, she is pregnant yet again.

I would say congratulations, but of course in Soapland things can never be simple.

Sharon had an affair with Arches worker, teenager Keanu Taylor.

Although they ended their affair and he went on to start a relationship with her stepdaughter Louise Mitchell, who is also pregnant with his baby, Sharon and Keanu ended up sleeping together yet again when Louise broke up with him.

Louise and Keanu ended up getting back together as she told him she didn't actually abort her baby. At the same time Sharon found out she was pregnant!

Sharon later had a pre-natal DNA test and it proved the baby isn't her husband Phil's. So unless there's a mysterious third man viewers haven't seen, the baby is Keanu's.

It sort of feels like Keanu is trying to beat Jack Branning in how many Mitchell women he can get pregnant. 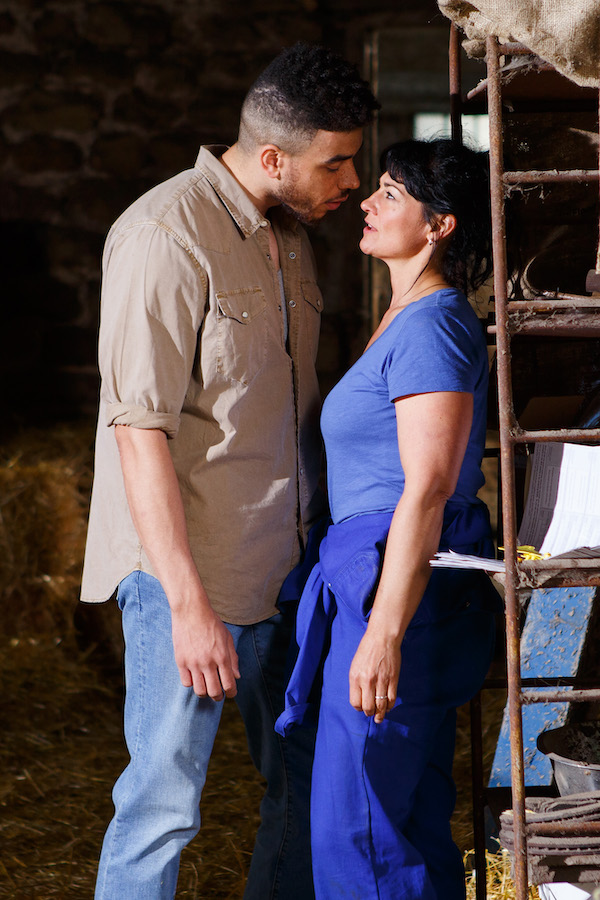 Moira is currently having an affair with farmhand Nate (Credit: ITV)

Another affair for Moira? Why not.

Currently Moira, who is married to Cain Dingle, is sleeping with her farmhand Nate behind Cain's back.

After going through this ridiculous cycle of Moira hates Nate, Moira sleeps with Nate, Moira says nothing more can happen between them and repeat, Moira agreed she would see Nate behind Cain's back as long as they were careful and had no feelings for each other.

I can see how affairs in soaps can be interesting and can be important for a character's development, but this isn't a new storyline for Moira.

She cheated on husband John Barton with his brother James before she came to the village. She also cheated on John with Cain.

Let's not forget she also slept with her nephew (by marriage) Pete Barton and farmhand Alex Moss not long after John's death. 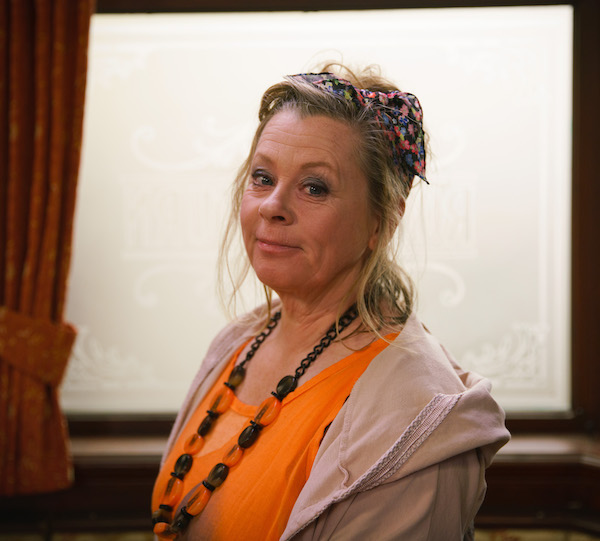 So the idea of Gemma naturally conceiving quads is a bit far-fetched, however, not impossible, but the storyline with her mother Bernie selling positive pregnancy tests is a bit out there.

Bernie, who is Gemma's mother, had the golden idea of harvesting her daughter's pee by blocking the toilet and getting her to wee in a bucket.

She then brought a load of pregnancy tests to dip in the pee and sell online on the dark web.

Her new neighbour, Michael Bailey, found out what she was up to and suggested a way for her to make more cash and the pair went into business together.

Of course, Michael's mum Aggie found out what he was doing and wasn't impressed.

I like the idea of Bernie and Michael going into business to do these 'get-rich-quick' schemes, but wouldn't it have been funnier for them to come up with a ridiculous invention? 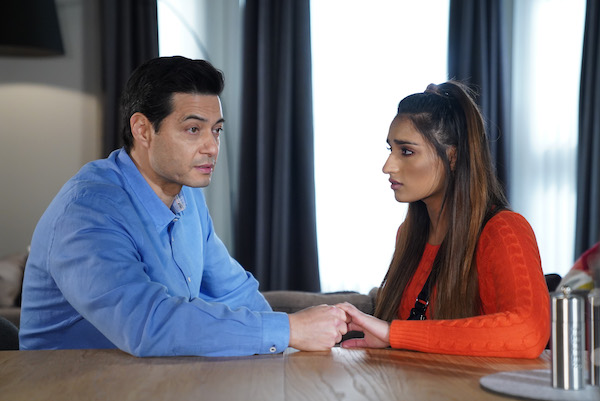 Adam has been sleeping with Habiba behind girlfriend Honey's back (Credit: BBC)

In EastEnders Adam and Honey have been together since last year. Earlier this year, Mariam and Arshad's granddaughters Habiba and Iqra arrived on the square.

As Mariam and Arshad fostered Adam when he was a child, he is technically Habiba and Iqra's foster-uncle.

Of course, this didn't stop Habiba and Adam having an affair.

They were together for a couple of months and Honey recently put the pieces together seeing how they were around each other.

But there is a lot about this plot that is frustrating.

Firstly, Honey was warned about Adam by her ex Billy, who saw Adam and Habiba kissing.

And don't forget Honey saw them being intimate through the shop CCTV footage, but of course, Adam said Habiba was upset and Honey just believed every word he said.

Although she didn't tell anyone she knew about their affair, Honey hinted to Habiba she knew what had been going on.

Another point that is frustrating is that she split up with Billy because he cheated on her and refused to get back with him.

So now she's just letting Adam get away with cheating? We hope she has a revenge plan. 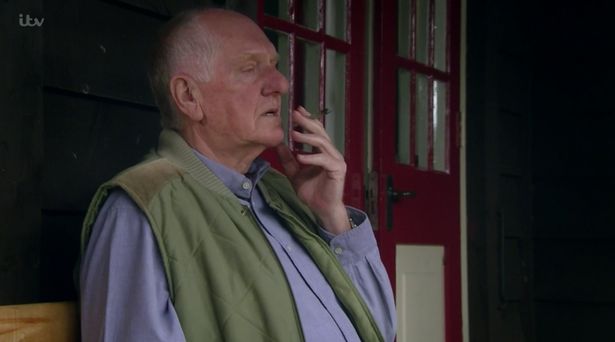 A couple of weeks ago Liv discovered cannabis plants grown by Gerry Roberts.

Although Doug said he wanted rid of the plants, he decided to keep them and start smoking it for his back pain.

Doug went from smoking in the playground pirate ship, which is a converted B&B and also something children play on, to smoking outside the village hall. 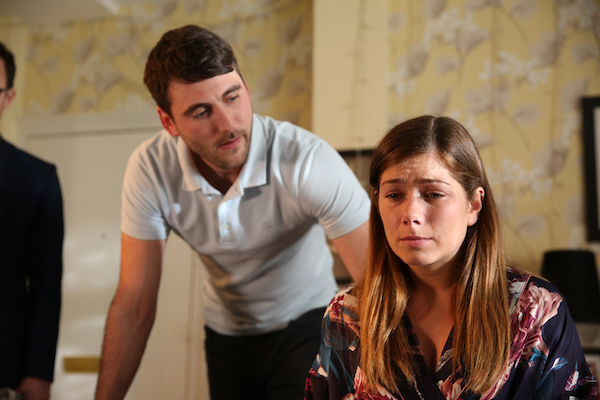 Maxine is currently caught up in a giant web of lies in Hollyoaks.

Whilst she has been lying for months about being ill and the symptoms she's having, she is actually suffering from a psychological disorder called Munchausen's Syndrome, which is where someone pretends to be ill or deliberately produces symptoms of illness in themselves.

For months Maxine has been faking symptoms such as seizures, fainting and pain.

Her new husband Damon and most of her friends believe she has a tumour on her spine and hasn't long left to live.

But the storyline took a twist when Damon was arrested for taking the money from Maxine's treatment fund and putting it into his personal account (which he used to pay for their wedding and her living funeral).

However, we do wonder how no one has said anything to Damon.

Dr Levi, Sienna and Misbah all know about Maxine's lies, yet no one has said anything. Even Grace was suspicious for a while.

Surely she'll have to tell the truth soon. 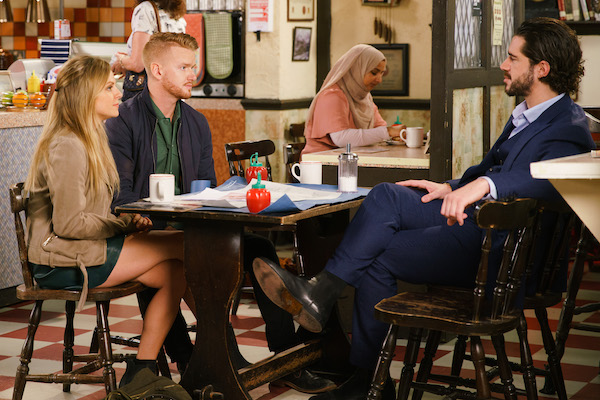 Gary is currently in charge of the factory roof rebuild (Credit: ITV)

Corrie viewers know Gary Windass caused the damage to the Underworld factory roof, which saw it to collapse killing Rana Habeeb on her wedding day.

Him being the new cobbles villain is far-fetched enough, but now he's taking over the factor?

Gary recently took over as a loan shark after he killed Rick Neelan. He also started making money from selling old furniture and lending out cash.

Gary managed to get out of being No.1 suspect for the roof collapse by telling the police Rick sabotaged the roof as revenge for Gary not making his repayments.

Now Gary has hired a man named Derek to 'buy' the land the factory is built on and rent it out to Underworld. Derek also appointed Gary project manager of the rebuild.

However, Derek is only there for appearances because Gary is the one pulling the strings behind the scenes.

Adam Barlow is now suspicious of Gary and Derek after he caught them arguing.

It just seems ridiculous that Sarah and the factory workers have decided to forget that Gary very much looked liked the guilty party for a long time just because they wanted the factory rebuilt.

Kerry and Amy get away with the factory fire - Emmerdale 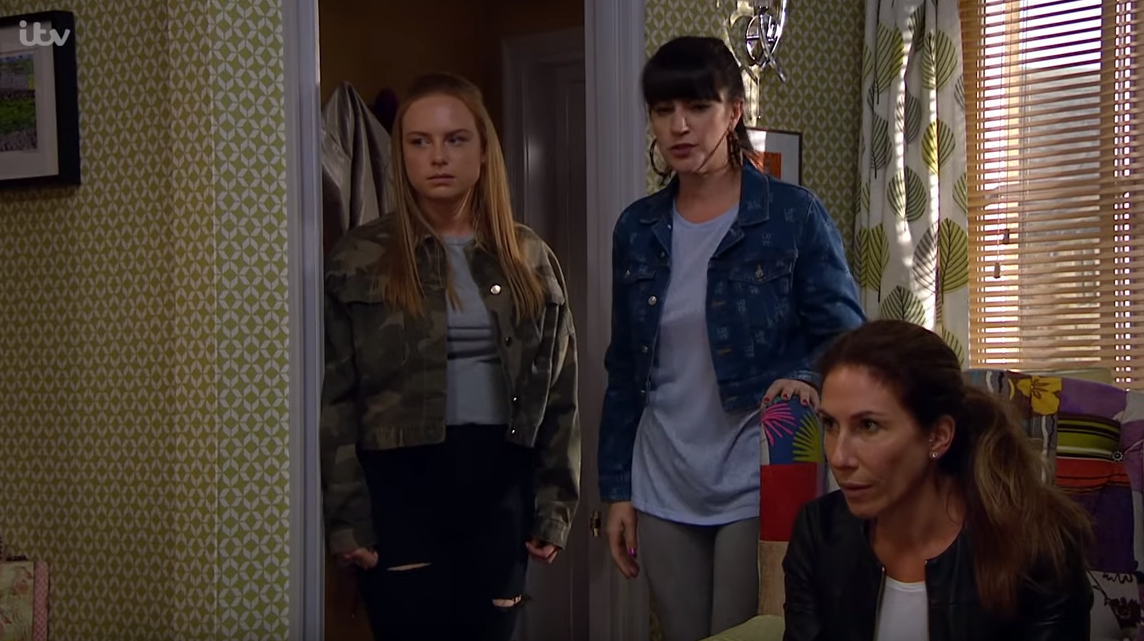 A couple of weeks ago, a woman Amy knew in Ireland showed up in Emmerdale demanding the cash back that Amy stole from her.

Amy's mum Kerry, set off the fire alarm in the Sharma & Sharma factory where she works and stole charity money from the safe so Amy could pay this woman back.

But when Amy and Kerry went to put the money back, Amy decided to keep it and smash up the CCTV so they wouldn't get blamed. However, the damage to the CCTV started a fire.

Tracy, who was in the factory cupboard waiting for Billy, ended up getting trapped when the door got jammed.

Luckily, her dad Frank, had come back to clear out his locker (because he had been fired that day) and get the engagement ring he bought for girlfriend Megan.

Seeing the fire and hearing Tracy was stuck he tried to help and managed to get her out.

As she left the factory, he went back for the ring but just as he walked out the door, an explosion threw him against a van, killing him.

Deciding they couldn't go down for what they had done, Kerry lied to the police saying she saw Frank walking away from the factory and when she saw Tracy head in, she assumed she was looking for him and told him.

She then lied even more saying Frank looked worried when she revealed Tracy was in the factory and now the villagers presume that Frank started the fire that took his own life.

What does this mean for Amy and Kerry? We can't really see a way out of this for them.

Was Amy really just brought back to go to prison?

It's just sad to think most of the villagers, including his daughter Vanessa, believe Frank started the fire.

And it's even worse to think Kerry and Amy are potentially going to get away with it.

What is your least favourite current storyline? Leave us a comment on our Facebook page @EntertainmentDailyFix and let us know what you think!