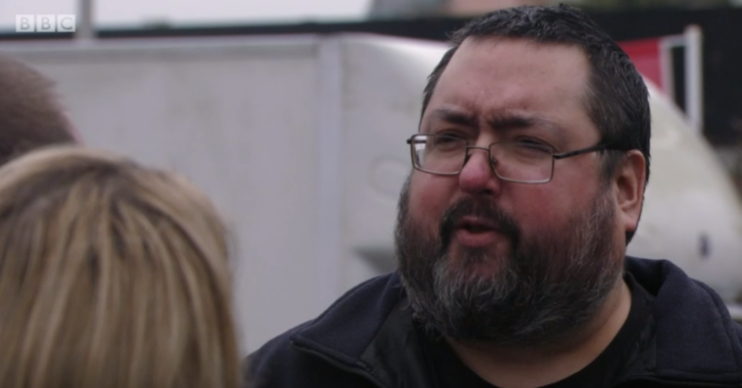 Ewen's character had a hilarious encounter with Ian Beale

The Office fans went wild as Keith actor Ewen MacIntosh made a cameo appearance in last night’s EastEnders (Tuesday, May 5).

Ewen is best known for playing Keith Bishop in the British sitcom starring Ricky Gervais and Martin Freeman. The UK series ran from 2001 until 2003.

Who did Ewen play in EastEnders?

But in last night’s trip to Walford, Ewen made an appearance as a delivery driver who got into a bit of a disagreement with Ian Beale.

Ian had ordered a bench as a memorial for Sharon’s son Dennis Rickman, who died in the boat accident.

However the bench arrived too soon and Ian tried to find out what was going on.

The delivery man explained he was dropping of Counsellor Beale’s memorial bench, stating he didn’t even know he had died.

As Ian explained the bench wasn’t meant to come for weeks, the driver said: “I did wonder. I didn’t think he was popular enough to warrant a bench.”

But as Ian tried to tell the delivery man he is Counsellor Beale, the driver thought he had ordered the bench for his own memorial – despite still being alive.

Fans of The Office loved the cameo and made sure to write about it on Twitter.

Keith from The Office showing up as an extra in EastEnders. The littlest things in lockdown give me the most excitement.

What’s big Keith from The Office doing as an extra on Eastenders 😂 pic.twitter.com/duh8iS1PRb

Keith from ‘The Office’!!! #EastEnders pic.twitter.com/a7A1YE6kKa

It's Keith from 'The Office'! #EastEnders pic.twitter.com/876WNZGGXe

Yessss, Keith from The Office is making a cameo in #EastEnders pic.twitter.com/x20IlGaF6D

KEITH FROM THE OFFICE!!!!! #EastEnders

However some joked they were disappointed by the lack of scotch eggs. This is a reference to The Office episode where Keith dresses up as Ali G for Comic Relief.

Keith from The Office delivering a bench to Ian Beale in Eastenders , not a scotch egg in sight!

Whilst The Office only ran for two years, it later went onto have an American series. The U.S. Office starred Steve Carrell and ran for nine seasons.

The series started two years after the original in 2005 and ended in 2013. During the U.S. series, there was a small crossover with the UK series.

After Ian’s conversation with the delivery man, Kathy told residents how Ian tried to save Dennis. She also told them he was paying for the memorial bench.

It’s Keith from The Office!

Ian looked guilty as Dotty and Vinny watched on. Knowing that Ian was the reason Dennis was trapped on the boat in the first place, Vinny encouraged Dotty to tell people the truth.

But she no longer has any proof. And with Ian’s son Bobby collapsing after taking drugs she sold, he could easily land her in trouble.

Will the truth about Ian and Dennis ever come to light? And will Dotty be the one to expose him?