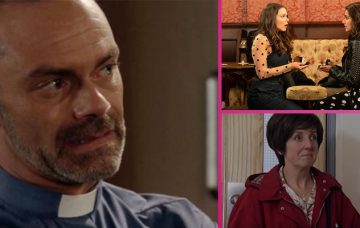 The history of LGBT characters in Coronation Street

Here's a look at the show's LGBT roles

Coronation Street has featured a number of LGBT characters over the years and have screened some groundbreaking moments, such as Todd Grimshaw’s kiss with Nick Tilsley.

Hayley Cropper became British soap’s first transgender character in 1998 and was loved by fans everywhere until her sad death in 2014.

Currently on screen, Kate Connor and Rana Nazir are planning to get married and have a baby.

Here’s a look at all the LGBT characters Corrie’s had.

Todd Grimshaw was a confused teen when he filmed Coronation Street’s first ever gay kiss.

In a relationship with Sarah Platt at the time, Todd planted a kiss on the lips of her brother, Nick Tilsley, who rejected Todd’s advances.

Todd became the show’s first regular gay character and his coming out storyline was credited with bringing the show into the 21st century.

He left the soap in 2004, but returned in 2013 and had relationships with Marcus Dent and Billy Mayhew before departing for good in 2017.

She grew close to Sophie Webster, but was engaged to Caz Hammond at the time. Things got messy when Kate broke up with Caz, but Kate eventually moved on with Imogen Pascoe.

However, that relationship didn’t last long when Kate’s best friend Rana Nazir let slip she was in love with Kate. After a secret affair, Kana’s love was finally revealed to the world and now they’re happily planning their future. But Kate’s desire for a baby could push them apart…

Nurse Rana was initially married to Zeedan Nazir, but their union didn’t last long when she began to fight her feelings for best friend Kate Connor. The pair embarked on a secret affair before their romance was exposed.

Rana’s family were so ashamed they paid Zeedan to stay married to her, but things eventually fell apart when Rana refused to live a lie any longer.

Kana were almost pulled apart when Rana’s father died and Rana couldn’t cope with the guilt of lying to him about her sexuality on his deathbed, but the couple have since been reunited and are happily planning their wedding. Aww!

Hayley Cropper made history as the first transgender character on a British soap when she arrived in January 1998.

She was with the cast of Coronation Street for 16 years, and was a friend to everyone, always there for Carla Connor, Fiz Stape and Becky McDonald, to name a few.

But it was her enduring love with Roy Cropper that made her time in Weatherfield so noteworthy, and all the more devastating when she took her own life in 2014 after being diagnosed with terminal pancreatic cancer Much like Roy, we’ve still not recovered from her loss.

Sean Tully first appeared in Weatherfield in 2003 before joining the cast as a regular in 2004.

He’s worked at Underworld and in the Rovers Return and Eileen Grimshaw is like a surrogate mother to him. Sean’s always been unlucky in love, with failed relationships with Marcus Dent and Billy Mayhew under his belt.

After ending up homeless and jobless in 2018, Sean’s turned things around with the help of old flame Billy, but is there any love in his future?

Billy Mayhew arrived in Weatherfield as the new local vicar – and Sean’s boyfriend – in 2014. Despite his Godly exterior he hasn’t always been so squeaky clean when he dumped Sean after developing feelings for Todd.

In 2017 it was revealed that Billy had been driving the car that hit Peter Barlow’s sister (Adam Barlow’s mother) Susan Barlow and was therefore responsible for her death. After Billy fell off a cliff during a confrontation with Peter, Adam got Billy addicted to painkillers, resulting in Billy taking heroin.

Fortunately, he’s cleaned up his act again and is everyone’s favourite vicar once more.

Sophie Webster became Corrie’s first lesbian character when she embarked on a romance with best friend Sian Powers in 2010. The girls planned a wedding, but Sian jilted Sophie after discovering Soph had kissed Amber Kalirai.

Dalliances with Kate Connor and much-older Paula Cunliffe have followed, but Sophie’s yet to find that long-lasting bond she had with Maddie again. Sian Powers was the best friend, then girlfriend, of Sophie Webster.

After Sophie kissed Sian, Sian initially rejected her insisting she wasn’t a lesbian, but she then decided she was in love with Sophie and after a battle with their pastor, who told them their relationship was sinful, they found a new church and planned their wedding.

In the end though, their relationship was doomed and Sian left Sophie after discovering Sophie had kissed Amber. She departed Weatherfield and the last we heard she had a new girlfriend called Chloe.

Maddie Heath arrived on Christmas Day 2013 when she met Sophie Webster and Sally Metcalfe at a soup kitchen. She quickly rubbed Sal up the wrong way and pushed her head into a trifle before stealing her handbag.

But Maddie and Sophie soon fell in love and moved in to Kevin Webster’s house together after Sally refused to accept them as a couple.

Maddie worked at Underworld after impressing Carla Connor and was fully ingratiated into Street life, but that life was tragically snatched away from her when she died in an explosion at the builder’s yard due to a fire in Victoria Court.

Ted Page is Gail Rodwell’s father, who she only met when he arrived in Weatherfield in 2008. He had had no idea Audrey was pregnant with his baby when he left her after she turned down his proposal.

Had they got married however, it would have ended in disaster because Ted was gay. He was in a relationship with a man called James for 20 years prior to his arrival on The Street.

He had no idea he had a daughter until he met with Audrey, but after meeting Gail he fit right in with the Platts and although he’s since disappeared from screens, he still keeps in touch with his family.

Marcus Dent started dating Sean Tully in 2007, however they split up and Marcus left in 2008.

But he returned in 2011 and he and Sean reunited, however they finished things again in 2012 after disagreeing whether or not to have a child. Marcus then started a relationship with Maria Connor, but Todd Grimshaw was determined to prove Marcus was still gay and seduced him.

Marcus and Todd began a relationship, but after Todd cheated, Marcus left for good in 2014.

Soldier Caz got engaged to Kate Connor on only their second date, but while Caz wanted them to have their happy ever after, Kate wasn’t quite so committed to their relationship.

Caz went a bit loopy with jealousy over Kate’s friendship with Sophie Webster and faked an injury to keep Kate with her. When Kate found out about her lies, she broke up with her and Caz turned to Maria Connor for a shoulder to cry on.

She then fell in love with Maria, but Maria didn’t feel the same and threw her out. Caz faked her own death to get back at Maria, but found herself arrested when Aidan Connor got proof she was still alive.