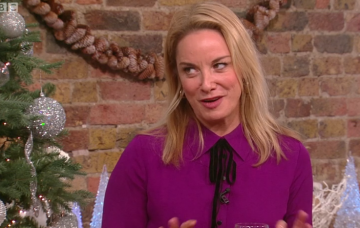 Is she staying or is she going?

Tamzin Outhwaite has confirmed she will remain with EastEnders.

The actress shocked fans by revealing her contract was originally shorter and she would soon be making her exit if she hadn’t signed another.

She revealed she had decided to stay with the soap because she was having so much fun with her storylines.

It will come to an explosive climax on New Year’s Day.

Read more: Jacqueline Jossa hints she is going to return to EastEnders in the new year

And now it can be revealed how Mel won’t be going anywhere, just yet.

Tamzin told Saturday Kitchen: “The storylines that they told me about seemed like I was going to have fun with them, which I have been, and am.

“They tell you about the projected [storylines], what’s going to happen in the future, possibly for the next year.

“So, I was going to be there for a year, and now I’ve extended it to be there a bit longer, because I’m having such a good time.”

Tamzin’s good time will see Mel try to bring her on-screen fiancee down in an explosive New Year’s Day episode.

“It’s going to be quite explosive, in a very short time,” the actress added.

“As much as Mel has already done a New Year’s wedding, this is going to be even more explosive.”

Tamzin teased: “We don’t know whether or not [Ray] does get brought down, but we know at this stage that Mel’s on a mission.

“It was a great love story at one point in her life, but now she’s on a mission to bring him down.”

Are you happy Mel will be in Walford for a longer stint? Leave us a comment on our Facebook page @EntertainmentDailyFix and let us know what you think!